Update Required To play the media you will need to either update your browser to a recent version or update your Flash plugin.
By Bryan Lynn
15 May, 2018


A new report says a United States government program for foreign students has been expanding in recent years.

The government's Optional Practical Training, or OPT program was set up to help foreign students graduating from American colleges and universities. It gives them a chance to stay in the country for temporary employment after they complete their studies.

The report is from the Washington-based Pew Research Center. It notes that many foreign students take classes in science, technology, engineering and mathematics. These four subjects are known by a single term: STEM. The center noted that, under OPT, the number of foreign students graduating and working in STEM fields rose 400 percent between 2008 and 2016.

The federal program enables F-1 visa holders who complete school to remain in the United States and work for up to one year. Two years ago, the program began permitting graduates in STEM fields to work an additional 24 months.

More than half of foreign graduates in the program specialized in STEM fields. 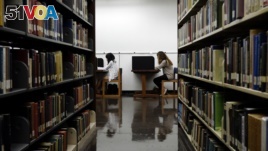 The Optional Practical Training program is not as well-known as the U.S. government's H-1B visa program. But the number of people taking part in OPT is much larger.

Under the H-1B program, foreign workers are permitted to stay in the U.S. for up to six years. After this time, H-1B visa holders must either return to their home country or seek permission to stay permanently. Working a temporary job through OPT is seen as a first step for many people hoping to receive an H-1B visa at a later date.

The H-1B program is designed to employ foreign workers in jobs requiring "specialized knowledge," according to the U.S. Department of Homeland Security. Many of these jobs are filled by people with STEM backgrounds.

Pew noted that one reason for the rise in OPT numbers is because the number of new students on F-1 visas at U.S. colleges went up 104 percent from 2008 to 2016.

The United States has the largest foreign student population in the world. Neil Ruiz, a co-author of the report, says the OPT program has been an important tool in getting foreign students to attend U.S. schools and keep them here after they graduate.

But foreign student enrollment at U.S. colleges is reported to have dropped since the presidential election in 2016.

Last November, the Institute of International Education released results of a study involving nearly 500 colleges and universities. They were asked to provide enrollment numbers for the 2017-2018 school year. On average, the results found a 7 percent drop in the number of newly-enrolled foreign students at U.S. schools. 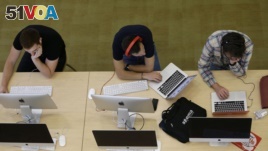 Students work on computers at the Hunt Library at North Carolina State University in Raleigh, N.C., on Tuesday, May 3, 2016. (AP Photo/Gerry Broome)

The institute says the drop is likely a result of government policies that seek to limit immigration and restrict travel from some mostly Muslim countries. In addition, the group says American colleges also are facing increasing competition from countries like Canada, Australia and Britain.

The U.S. government has also considered making changes to the H-1B and F-1 visa programs. Officials have said the changes would aim to prevent foreign nationals from taking jobs away from American workers.

U.S. Immigration and Customs Enforcement has announced plans to carry out "comprehensive reform" of practical training programs in an effort "to reduce fraud and abuse."

The Association of International Educators estimated the economic effects of more than one million international students in the U.S. Its study found that the students added about $37 billion to the U.S. economy and supported 450,000 jobs during the 2016-2017 school year.

The association's director, Esther Brimmer, said that it is important to realize there is "increasing global competition" for international student talent. She urged U.S. officials to strengthen policies that center on "our nation's founding ideals of inclusivity and opportunity."

Bryan Lynn wrote this story for VOA Learning English, based on reports from Pew Research, the Associated Press and other sources. George Grow was the editor.

background – n. the total of someone's experience and knowledge

coauthor – n. someone who helps another person write a story, report or book

enrollment – n. becoming a member or participant in something

opportunity – n. occasion or situation making it possible to do something that you want to do or have to do