Study Suggests Dinosaurs May have Started as Very Small Creatures

Update Required To play the media you will need to either update your browser to a recent version or update your Flash plugin.
By Bryan Lynn
12 July 2020


A new study adds to growing evidence that dinosaurs may have developed from very small animals.

Scientists have studied the fossil of a small animal, called Kongonaphon kely, which is believed to be an ancestor of the dinosaurs. The name given the reptile means "tiny bug slayer," or very small killer of insects.

The four-legged animal is believed to have been just 10 centimeters tall and about 40 centimeters long. Researchers say it lived about 237 million years ago in what is now Madagascar.

Scientists described examinations of the fossil in a recent study published in Proceedings of the National Academy of Sciences.

The researchers believe the animal came before dinosaurs, which developed in the Mesozoic Era. It ended about 66 million years ago. The study notes that much remains unknown about the history of dinosaurs and their winged relatives, pterosaurs.

Scientist Christian Kammerer of the North Carolina Museum of Natural Sciences, led the study. Kammerer told Reuters news agency that based on the body size suggested by the fossil, "we argue that dinosaurs and pterosaurs evolved from a miniaturized ancestor." 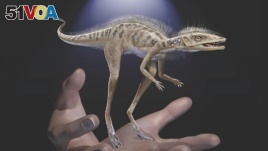 This illustration provided by the American Museum of Natural History in July 2020 depicts a Kongonaphon kely, a newly described reptile near the ancestry of dinosaurs and pterosaurs, shown to scale with human hands.

John Flynn, of New York's American Museum of Natural History, was a co-writer of the study. He said earlier studies have also supported the argument. "Evolution of gigantism from tiny ancestors is not uncommon in the fossil record," Flynn said.

The scientists said the Kongonaphon's teeth showed signs of use in a way that suggested the small reptile ate insects.

The team examining the fossil also found evidence of "fuzzy skin coverings," including feathers. The researchers said the feathers may have developed in the small-bodied creature to help control body temperature. This would have been especially important in the extreme climate of the early part of the Mesozoic Era. The days were hot, the nights, cold.

"Recent discoveries like Kongonaphon have given us a much better understanding of the early evolution of ornithodirans," Kammerer said. The ornithodiran group includes animals in the evolutionary lineage that led to dinosaurs and pterosaurs. He added that the research provides strong evidence that the creature "decreased sharply early in the history of the dinosaur-pterosaur lineage."

On the lighter side, Kammerer told The Associated Press he thinks the tiny creatures "would have been quite cute animals." He said an animal that looks like a dinosaur and can fit in your hand, "would probably make a great pet."

Bryan Lynn wrote this story for Learning English, based on reports from The Associated Press, Reuters and the North Carolina Museum of Natural Sciences. Caty Weaver was the editor.

evolve – v. to develop over time

feather – n. any one of the light growths that make up the outer covering of the body of a bird