Update Required To play the media you will need to either update your browser to a recent version or update your Flash plugin.
By Dan Friedell
11 October 2021


Car makers like Porsche, Ferrari and Mercedes-Benz are known for their fast and light "supercars." Most are powered by gasoline engines.

The companies want to create electric versions of their famous cars before policies go into effect that restrict engines powered by gas.

As governments around the world get more serious about climate change, car makers are updating many of their standard vehicles so they can be powered by energy stored in batteries.

However, the batteries currently used by electric cars are too heavy to be used in most supercars. The weight of the batteries would keep drivers from being able to reach very high speeds. In addition, if the cars go too fast, the engines used in electric cars overheat. 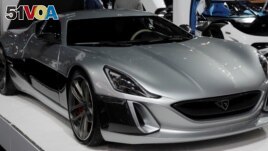 A Rimac Automobili Concept_One electric supercar, worth $1.2 million and one of only eight made, is displayed at the 2017 New York International Auto Show in New York City, U.S. April 13, 2017. REUTERS/Lucas Jackson/File Photo

If the car makers, which also include Rimac from Croatia, Lotus from Great Britain and Koenigsegg from Sweden, want to keep making vehicles that cost hundreds of thousands of dollars, they will need to develop better engines and batteries.

That is why they are working with new companies, such as Britain's YASA, which makes engines that weigh just 23 kilograms for use in electric cars. Traditional engines for supercars can weigh as much as 300 kilograms.

YASA uses engine technology known as axial flux. Another company called Saietta is working on axial flux electric engines for motorcycles. It says it can make a larger version for supercars.

The axial flux engines have been around for a long time, but they are only recently seen as a solution for car makers because they can produce a good amount of power for their weight.

Graham Lenden works for Saietta. He said the traditional auto companies are "looking for someone to hold their hand" during the change to electric cars.

The Reuters news agency suggests the change to electric supercars will require the car makers to risk billions of dollars without knowing if the investment will pay off.

Daimler is the company that makes Mercedes-Benz. It recently purchased YASA so it would have a source for high-powered electric vehicle engines.

Tim Woolmer started YASA in 2009. He said his motor is cooled by oil, and car companies do not need to worry about it overheating. In addition, since the axial flux engines are smaller and lighter than traditional engines, the cars are lighter overall and can go longer distances between charges.

While the cost for the supercar companies is high, they stand to gain over the long run. The market for supercars is small, but profitable. A consumer research company said about 150,000 supercars that cost between $130,000 and $13 million will be sold this year. By 2026, the number could rise to about 220,000.

When Daimler purchased YASA, Woolmer said it asked the company to work on making a small, light engine.

He said the new technology often appears on the costliest cars first.

Chris Harris leads YASA. He said companies other than Daimler, such as Ferrari, will be able to use its engines. "They want us to continue working with our supercar customers because that's the leading edge," he said.

The British brand Lotus, now owned by companies in China and Malaysia, plans to release a fully electric supercar in 2026. Lotus said it already has a new base for electric cars that is 37 percent lighter than its current supercars.

Another company, known as Silk-FAW is owned by companies in China and the U.S. It will build electric cars in Italy inspired by the aerospace industry. It says some parts will weigh 20 percent less than traditional car parts.

Once the car parts, engines and batteries are lighter and able to create the same amount of power as traditional supercars, one challenge will remain: how often will the batteries need to be charged?

"Unless batteries go through a massive revolution, you're never going to carry the amount of energy that a fuel tank will carry," said YASA's Woolmer.

Dan Friedell adapted this story for Learning English based on reports by Reuters. Susan Shand was the editor.

What would you want more from an electric super car? High speed or long battery life? Tell us in the Comments Section and visit 51VOA.COM.

motorcycle – n. a vehicle with two wheels that is powered by a motor and that can carry one or two people

aerospace – n. an industry that deals with travel in and above the Earth's atmosphere and with the production of vehicles used in such travel