Update Required To play the media you will need to either update your browser to a recent version or update your Flash plugin.
By Bryan Lynn
10 January 2022

The long-time prodemocracy leader and Nobel Peace Prize winner had been found guilty of violating coronavirus rules and having banned communication equipment.

A legal official reported the information to news agencies on the condition the official's identity be kept secret. The official said the 76-year-old Suu Kyi was sentenced to two years on each charge. 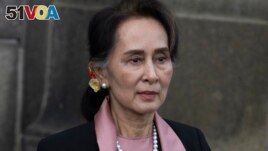 Last month, she was found guilty on two other charges and ordered to serve two-years in prison for those.

Suu Kyi was placed in detention at an unknown site after her arrest February 1, when the military seized power. It is trying her on many charges in a series of cases. She could spend the rest of her life in prison if found guilty of more.

The military seizure came just as newly elected lawmakers were to take their seats in parliament. Military officials said the election in November had been dishonest and that the army was answering the wrongdoing. The country's electoral commission had rejected the army's report.

Suu Kyi's National League for Democracy won a majority of seats in the elections. Top members of her party have also been arrested, including President Win Myint. State Counsellor Suu Kyi served as leader of the ousted government.

Human rights groups have widely condemned the trials of the ousted civilian leaders as corrupt. The groups say Myanmar's military is seeking to strengthen its power and remove Suu Kyi as a political force.

The army takeover led to large nonviolent protests across the country. The military has made numerous arrests and used deadly force against the protesters. Nearly 1,400 people have been killed by security forces in violent clashes between the military and citizens, the Assistance Association for Political Prisoners reports. The group has been observing the number of deaths and arrests throughout Myanmar.

The military has restricted contact with Suu Kyi since it seized power. There have been international calls to include the ousted leader in any talks aimed at easing the country's violent political crisis.

The Associated Press, Reuters and VOA News reported on this story. Bryan Lynn adapted the reports for VOA Learning English.