Update Required To play the media you will need to either update your browser to a recent version or update your Flash plugin.
By Bryan Lynn
09 August 2021


The Taliban took over several major provincial capitals after a weeks-long military offensive in Afghanistan.

On Monday, two Afghan lawmakers told The Associated Press that the northern provincial capital of Aybak fell to the Taliban without resistance. They said government officials fled to another area in Samangan province.

In the northern province of Sar-e Pul, a local official said Taliban forces had taken over the capital, Sar-e Pul, after a week of resistance by Afghan security forces. The official, Mohammad Noor Rahmani, said government forces had now completely withdrawn from the province.

Kunduz was one of the provincial capitals captured by Taliban rebels over the weekend. Taliban fighters planted their flag in the city's main center, a video received by the AP showed. 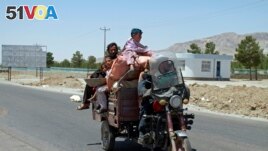 An Afghan family flees fighting as Afghan security personnel took back control of parts of the city of Herat following fighting between Taliban and Afghan security forces, on the outskirts of Herat, west of Kabul, Afghanistan. (AP)

Kunduz, with a population of more than 340,000, has long been defended against Taliban takeovers by Western troops. Reuters news agency reported that Afghan government forces were battling Taliban fighters Monday as they sought to retake the northern city.

In western Herat province, security officials told Reuters that heavy fighting had taken place outside the capital city, Herat. Arif Jalali, head of Herat Zonal Hospital, said 36 people had been killed and 220 wounded in fighting over the past 11 days. He said more than half of the injured were civilians and women and children were among the dead.

In Lashkar Gah, capital of Helmand province, the Taliban took over nearly all police districts during the past week, The Associated Press reported. Heavy fighting was reportedly continuing in the area.

The Taliban has intensified efforts to take control of areas across the country after the United States announced last month it would end its military activities in Afghanistan by the end of August.

The Taliban's country-wide offensive intensified as U.S. and NATO troops began preparing to withdraw from the country. The U.S. military has been involved in a nearly 20-year war in Afghanistan. With Taliban attacks increasing, Afghan security forces and government troops have fought back with U.S.-backed airstrikes.

The increased fighting has raised growing concerns about civilian casualties. UNICEF said on Monday it was shocked by the increasing number of casualties among children during the recent violence. Over the past three days, it reported at least 27 children had been killed in different provinces, including 20 in Kandahar.

UNICEF called the killings in Afghanistan "atrocities." It said the increase in violence was harming "already vulnerable children." The agency did not identify the side responsible for the killings. UNICEF also expressed concern for what it said was increased recruitment of children by armed groups.

recruit – v. to persuade someone to join a company, organization or the armed forces