Update Required To play the media you will need to either update your browser to a recent version or update your Flash plugin.
By Jonathan Evans
22 September 2020


Many schoolteachers in the United States are choosing not to return to the classroom this year because of the coronavirus health crisis. Now, schools around the country are looking to find substitute teachers. In some places, officials are lowering requirements to help get substitutes in classrooms.

Several states have seen an increase in educators seeking retirement or taking time off from work. That is putting more pressure on school workers in places that were already dealing with a lack of teachers and substitutes.

Among those leaving is Kay Orzechowicz, an English teacher at northwest Indiana's Griffith High School. The 57-year-old had hoped to teach for a few more years. But she felt her school's leadership did not fully support using recommended social distancing rules. She worried the school would not provide enough safety equipment to students and teachers. 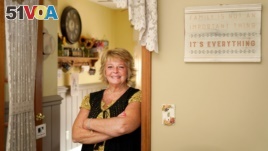 Kay Orzechowicz poses Wednesday, Sept. 2, 2020, for a portrait at her Griffith, Ind., home. After 35 years of teaching, Orzechowicz said COVID-19 "pushed her over the edge" to retire from northwest Indiana's Griffith High School at the end of July...

With the technology requirements and the pressure to record classes on video, Orzechowicz said it "just wasn't what I signed up for when I became a teacher."

Teachers in at least three states have died after being infected with COVID-19 since the start of the new school year. It is unclear how many teachers in the U.S. have become ill with the disease. But Mississippi alone has reported at least 604 cases among teachers and other school workers.

Some teachers could face pressure to return to the classroom after being exposed to the coronavirus. The administration of President Donald Trump has declared teachers to be "critical infrastructure workers."

Officials in Indiana report that they have received more than 600 teacher retirements since July. Studies suggest more teachers could retire this year than usual, said Trish Whitcomb. She is executive director of the Indiana Retired Teachers Association.

Whitcomb said, "I've gotten more (teachers) calling me back saying, ‘Well, I'm going to go ahead and retire.' Some still wanted to go back in the classroom, but they didn't think the risk was worth it. They looked at their grandkids and the life they have, and I think they're saying, ‘I'm just not going to do it.'"

In Salt Lake County, Utah, more than 80 teachers have either resigned or retired early because of concerns about COVID-19 in schools. More than half of those happened in one of the county's five school districts, Granite School District. All of the district's teachers who left were fined $1,000 for failing to let officials know they were leaving at least 30 days before.

Mike McDonough is president of the Granite Education Association teachers' union. He said teachers are resigning over concerns about how the schools have reopened. In Granite, most students will return to in-person classes for four days a week. There are few ways for teachers to give only online instruction.

Some teachers waited to leave until just before school started in hopes that the district would change its reopening plan. But leaving the classroom was "the only way to keep themselves safe," McDonough said.

He added, "I have heard from teachers that are just heartbroken to leave the classroom, but they didn't feel safe going back. They don't want that level of risk, and they have no other choice but to get out."

Education leaders in states including Arizona, Kansas, New Hampshire, Pennsylvania and Texas have said they are preparing for worsening teacher shortages.

The Missouri Board of Education has made it easier to become a substitute teacher under an emergency rule. Instead of 60 hours of college credit, new substitutes now only need to have a high school diploma, complete a 20-hour online training class and pass a background check.

In Connecticut, college students have been asked to step in as substitutes. Michele Femc-Bagwell is director of the teacher education program at the University of Connecticut. She said the school has been getting requests to use fifth-year graduate students as substitute teachers. But class and work responsibilities limit their availability to one day a week.

Many people who work as substitutes are retired teachers, such as 67-year-old Margaret Henderson. But the former teacher from Phoenix, Arizona, says she will not return as she had planned.

Henderson said, "I don't want to get called into a classroom where a teacher has called out because of the virus or to quarantine. And we know that's going to happen more and more."

Casey Smith reported this story for the Associated Press. Jonathan Evans adapted it story for Learning English. Ashley Thompson was the editor.

exposed – adj. not protected or covered

graduate – adj. of or relating to a course of studies taken at a college or university after earning a bachelor's degree or other first degree

infrastructure – n. the basic equipment and structures such as roads and bridges that are needed for a country, region, or organization to function properly