Update Required To play the media you will need to either update your browser to a recent version or update your Flash plugin.
By Alice Bryant
15 September 2020


For Bryant Atencia, the social and emotional well-being of his students is more important than his lesson plans.

The coronavirus pandemic has affected students and their families in Laguna Province in the Philippines, where he teaches high school. Students are also facing what he calls a "huge adjustment" to distance learning.

Atencia told VOA that before the health crisis started, he mainly taught from books and gave tests on the material.

"But now, I try to touch the emotion, touch base with the students and their parents. I try to build up the relationship that would make the students more comfortable in taking lessons online."

Right now, teachers around the world are amending their lesson plans for online learning. So, teaching social-emotional skills, or SEL, may not be high on their to-do list. Yet some experts say these skills are more critical than ever. 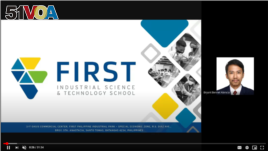 A screenshot of Bryant Atencia's virtual class at the First Industrial Science and Technology School, where he teaches high school students.

Christina Cipriano is director of research at the Yale Center for Emotional Intelligence at Yale University in Connecticut. In an open letter to teachers after schools closed in March, she wrote, "Now is when we need to apply everything we've learned about SEL." She added that these are "real skills that can support us in managing the rollercoaster of emotions we will be having over the coming days and months."

Atencia, who also trains teachers and teaches English at another job, was ready for whatever came. In May, he took online trainings on SEL and how to use it in the classroom.

One month before his high school students began classes, he held weekly Zoom video conference meetings with them. His goals were getting students excited about distance learning and identifying their skills and needs.

In one meeting, Atencia put the students into three separate online "rooms" and gave them a creative activity. He wanted to see how well they worked independently and in groups, and which ones would need the most support going forward.

The Collaborative for Academic, Social and Emotional Learning, or CASEL, is a research and training organization. It divides social-emotional skills into five areas. They are recognizing and controlling one's emotions; setting and reaching positive goals; showing sympathy for other people; developing and keeping positive relationships; and making responsible decisions.

The Yale center's research found that emotions like happiness and curiosity support a person's ability to pay attention and have greater involvement in school. But emotions like anxiety and fear, especially over long periods, hurt one's ability to think clearly.

Aileen Watts has witnessed this kind of anxiety in students firsthand.

In her 20 years of teaching, she has worked with students from all walks of life, including those who were homeless and those requiring special education. She has also taught Iraqi children living in the United States.

Watts says that, over the years, she has often included some form of SEL in her lessons.

Last year, she taught sixth graders at a school in McLean, Virginia. Some of the students were born in Iraq and had seen friends and family members killed.

Watts said she and other teachers built in activities to help students reduce anxiety. Classes took "brain breaks," which meant stopping the lesson to play a short game or even do a dance. And, if a child was feeling anxious, he or she could partner with someone to help calm those emotions.

"We've discovered that if they're stressed out, they don't take in new information. They don't participate."

Watts, who is based in Arkansas, has just begun teaching fifth graders online at Fort Belvoir, a U.S. Army base in Virginia. She said most of the SEL activities are built into the first part of the day and involve relationship building, dealing with social pressure and recognizing one's strengths and weaknesses.

A recent study of teenagers found that many struggled with depression, anxiety, and sadness during the mass school closures six months ago. Around 40 percent said they had not been offered any social or emotional support by an adult from their school.

Teachers are human, too

Students are not the only ones facing increased anxiety and stress because of the health crisis.

After the pandemic began, the Yale Center for Emotional Intelligence partnered with CASEL on a questionnaire for teachers. Within three days, more than 5,000 responded, saying they most often felt five emotions: anxious, fearful, worried, overcome and sad. Some teachers feared that they or a family member would get COVID-19. Another cause of stress was having to deal with their own needs and their families' needs while working full-time from home. And there was anxiety around using new teaching technologies.

Watts noted that the head of one Arkansas school asked its counselors to create de-stressing activities for the teachers. There, the teachers were facing increased pressure from problems involving the new technology. And some have family members who have lost jobs during the pandemic.

Atencia's high school, too, seems to know the value of SEL in the current climate. He has been entrusted to teach the skills to some of the other teachers.

lesson - n. a single class or part of a course of instruction

adjustment - n. a change that makes it possible for a person to do better or work better in a new situation

rollercoaster - n. a ride at an amusement park which is like a small, open train with tracks that are high off the ground and that have sharp curves and steep hills

curiosity - n. the desire to learn or know more about something or someone

participate - v. to take part in an activity or event with others

desperately - adv. done in a way that uses all of your strength or energy and with little hope of succeeding