Update Required To play the media you will need to either update your browser to a recent version or update your Flash plugin.
By Bryan Lynn
28 September 2022


Scientists have developed a technology-powered mapping tool to prevent ships from hitting whales in areas off America's west coast.

The system is called Whale Safe. It uses equipment placed in the ocean to identify the presence of whales in the surrounding area. The tool also records shipping activity and ship speeds. The collected data is then sent by satellite to scientists who examine it and seek to provide guidance to ship operators.

Developers of the system say it produces near real-time information about nearby whale movements. 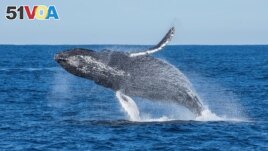 A humpback whale breaches off the coast of California, U.S. in this undated handout photograph.

Whale Safe has already been operating near ports in southern California. It was recently launched to the north in San Francisco Bay.

There is a problem in the bay with ships hitting whales. Last month, wildlife officials reported the latest suspected case. A humpback whale washed ashore in the San Francisco Bay with injuries suggesting the animal was killed in a ship strike.

The Marine Mammal Center near San Francisco said it was the fifth whale to be killed by a ship strike in the area this year. Wildlife officials note that the actual number of whales killed by ships is likely much higher because the bodies of the dead animals are rarely discovered.

Humpback whales visit California to feed in the summer and autumn before migrating south to reproduce off the coast of Mexico. They are among the world's most endangered whales. An estimated 35,000 to 40,000 remain in the wild. The Marine Mammal Center says the main threats facing humpback whales are strikes from ships and getting caught in fishing and waste equipment.

The Whale Safe system is designed to identify and protect several different species, including humpback, blue, fin and gray whales. It uses three methods to do so. First, it uses flotation devices – known as buoys – to record sounds the whales make. Second, it uses computer models to process current and historical ocean data to predict where the whales are most likely to be. Third, it permits trained observers and citizens to report whale sightings through a mobile app.

The Whale Safe project is supported by the Marine Mammal Center and the Benioff Ocean Science Laboratory at the University of California Santa Barbara. Other organizations and government agencies also cooperate on the project.

Developers of the system say the expansion of Whale Safe to San Francisco demonstrates that the system can be effectively deployed to additional areas of the United States and the world.

Officials from the Marine Mammal Center say they have plans to expand the system to other areas where whales face a high risk of being hit by ships. These areas include parts of the U.S. Eastern Seaboard. Worldwide, such areas include waters near Sri Lanka, Chile, Greece and Spain's Canary Islands.

Jeff Boehm is a leader of the Marine Mammal Center. He said the Whale Safe system combines the latest technology with thoughtful conservation efforts "to create a solution to reduce risk to whales." Boehm added, "This is where tech meets Mother Nature for the benefit of marine life."

Douglas McCauley is director of the Benioff Ocean Science Laboratory. He said in a statement that the killing of whales by ship strikes is "an avoidable problem."

"We can't any longer be passive observers of endangered whales washing ashore along San Francisco's beaches," McCauley said. He added, "Whale Safe is an exciting coming together of marine scientists, technologists, conservation organizations, business leaders and government partners to do something about this issue."

Bryan Lynn wrote this story, based on reports from the Marine Mammal Center, the Benioff Ocean Science Laboratory, The Associated Press and Whale Safe.