Update Required To play the media you will need to either update your browser to a recent version or update your Flash plugin.
By Bryan Lynn
20 November, 2017

Musk said the truck can travel 800 kilometers on a single electric charge while pulling a full load of 36,000 kilograms.

Musk did not give an exact price for the new trucks. Instead, he said the cost of operating the Tesla truck will be less than diesel trucks because of fuel savings and lower maintenance costs. He even claimed that moving goods with the Tesla Semi would cost less than transporting them by train.

Musk said production will begin in 2019. The company says interested buyers could pay $5,000 to reserve a truck. 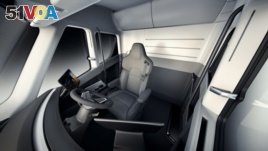 Tesla says its new Tesla Semi vehicle can travel 800 kilometers on a single electric charge, even while carrying a full load of 36,000 kilograms. (Tesla)

Musk told a crowd gathered to see the launch he believes the new truck's features are "better in every way" than any current transport trucks on the road.

The trucks will be equipped with the same driver-assist system built into some of Tesla's other vehicles. The Autopilot system can keep vehicles at a set speed and is capable of slowing them down automatically. It can also keep vehicles within traffic lanes.

Musk said he can imagine that someday, several Tesla electric trucks will autonomously follow each other down the road.

He added that the company plans to build a worldwide system of solar-powered "megachargers" to provide electrical charges for the trucks. He said the system could power trucks for another 640 kilometers after charging for as little as 30 minutes.

Tesla and other major manufacturers are making big investments in electric vehicles in a worldwide shift to energy-saving technologies.

Tesla faces competition in the electric truck market however. German carmakers Volkswagen and Daimler AG are designing their own versions. Daimler recently showed off its first all-electric zero-emission transport truck in Germany.

In the U.S., Nikola Motor Company is developing electric transport trucks powered by hydrogen. It says the trucks will be able travel up to 1,900 kilometers, with a refill time of just 15 minutes.

At the publicity event, Musk surprised the crowd with a new model of Tesla's Roadster. The car unexpectedly drove out of the back of the Tesla Semi.

Musk said he was pleased to announce that Tesla was launching the second-generation Roadster, a new version of the first car the company made.

Tesla said its updated Roadster will break several world records. Musk said the sports car will be the first vehicle in regular production to reach 100 kilometers an hour in just 1.9 seconds.

Musk added that the car will have a travel range of 1,000 kilometers on a single charge, which he said would be a new record for an electric vehicle.

"You'll be able to travel from LA to San Francisco, and back, at highway speed without recharging," Musk said.

Tesla says it plans to begin selling the new Roadster in 2020. However, the car is probably not for everyone. Its starting price, which is for the least costly model, is $200,000.

reserve – v. make arrangements to be able to use or get something at a later time

lane – n. part of a road marked by painted lines and used for a single line of vehicles

second-generation – n. a second line of a product or products that represent improvements over the first