The Role of School Nurses During a Pandemic

Update Required To play the media you will need to either update your browser to a recent version or update your Flash plugin.
By Alice Bryant
14 July 2020


When several students came to her office one day in 2009 with high temperatures and pain in their throats, Mary Pappas knew something was wrong. So she called the New York City Health Department. That call soon led to national action in what would become the H1N1 influenza pandemic, including the closure of some schools.

Laurie Combe is president of the National Association of School Nurses, or NASN. She recently told VOA that while school nurses can play an important role during any public health crisis, they "are always sentinels for health in the school community."

Combe explained that during a health crisis, school nurses can take on an "amplified role."

During the coronavirus crisis, teaching children and others how to wear face coverings and wash their hands is only a small piece of their work. As the virus picked up speed and schools closed, Combe says nurses continued do much of their usual work while taking on new responsibilities, some of which involved planning.

"School nurses are highly engaged in the physical and mental health needs of students and have expertise in emergency planning for pandemics."

Many school districts are deciding whether and how to reopen for the fall term. The planning comes as some parts of the U.S. experience sharp increases in coronavirus infection rates.

The Trump administration has threatened to withhold federal money if districts do not fully reopen.

Still, even when schools remain physically closed, the need for nurses' usual expertise does not disappear.

For instance, during the spring term, nurses continued many of their daily duties, such as keeping in contact with parents of children with health conditions or parents who needed medical advice and resources. Some nurses even took medicines and equipment to homes of students with health conditions.

When schools shut their doors, some students received no home instruction. So some nurses reached out to families and students to find out if their needs were being met. Aside from physical or mental health concerns, nurses found that many students lacked access to the internet.

The need for meals continued too, so nurses helped oversee the safe processes for delivering food to students, Combe said. Around 30 million American children depend on low-cost or free school meals each day for nutrition, the U.S. Department of Agriculture reports.

As schools remained closed, nurses stayed connected through local and national groups to stay informed about the virus. They also turned to state and federal health agencies for expert guidance.

When schools in her state closed in the spring, she continued to perform some day-to-day responsibilities. But, she also began taking part in video meetings with school nurses from around the country. And, Hogan joined an international online group of mostly school nurses to learn what was happening in Europe's reopened schools.

"In some ways it was an amazing time of connection for school nurses because we were all in the same boat, but our boats are all a little bit different."

Hogan is also on a team considering the state's plans to reopen schools. Maine, which has had comparably low coronavirus infection rates, recently released its first reopening proposal. School nurses are named throughout the plan as central to the team effort, which includes administrators, teachers, transportation workers, food service and others. 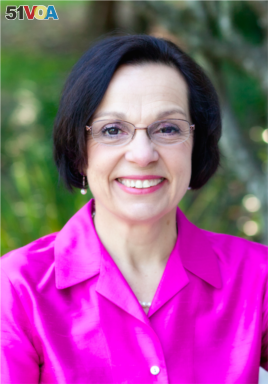 Laurie Combe is president of the National Association of School Nurses (NASN).

The shortage of school nurses

Nurses nationally have been involved in these cooperative efforts. But not all schools have their own school nurse.

U.S. school districts began cutting nurse staff leading up to the Great Recession of the early 2000s. Most districts did not bring the nurses back. Instead, many that were able to keep their jobs now work part-time at several different schools.

A 2016 study by NASN showed that just 39 percent of U.S. schools employ a full-time nurse. And 25 percent of public schools had no nurse at all. About 35 percent have a part-time nurse.

Hogan said the shortage is especially troubling because many children receive their main or only medical attention from school nurses.

Not much has changed since the earlier U.S. pandemics.

A report by the National Institutes of Health, or NIH, on the 1918 influenza pandemic stated that officials in some cities - such as New York City and New Haven, Connecticut - chose to keep public schools open. Officials reasoned that many children would have little or no medical supervision if schools closed. They also argued that schools could be more effectively disinfected than homes.

In those cities, school nurses and doctors performed daily medical inspections at schools. The nurses also educated their school communities on virus prevention and some made home visits to inspect the health of students and families.

While much has changed since the early twentieth century, the need for health experts at schools during a pandemic has not.

With large drops in tax revenues caused by the pandemic, schools across the U.S. have experienced huge budget cuts. Combe finds this concerning. She said that she has already heard reports of some nursing cuts, although massive reductions have not yet happened.

Combe added that some schools are looking to bring in more nurses to help with the expected work load to come. If schools reopen, there are also worries about getting necessary supplies.

In the Houston, Texas area, for example, the state education agency is providing schools personal protective equipment, or PPE. But the equipment does not include high-quality N95 face masks.

A congressional bill called the NURSE Act, launched in March 2018, intended to increase school nurses in underfunded schools. The bill, however, did not pass.

Alice Bryant wrote this story for Learning English. Bryan Lynn was the editor.

What is the role of school nurses in your school community? Write to us in the comments or visit 51VOA.COM.

role - n. a part that someone or something has in a particular activity or situation

sentinel - n. a soldier or guard whose job is to stand and keep watch

engage in - v. to take part in something

delivering - gerund. Taking something to a person or place

access - n. A way of being able to use or get something

disinfect - v. to clean something especially by using a chemical substance that kills all germs and bacteria

revenue - n. money that is collected for public use by a government through taxes