The Sound of a Foreign Word Caused Debate on US Campus

Update Required To play the media you will need to either update your browser to a recent version or update your Flash plugin.
By Dan Friedell
16 January 2021


Last August, The University of Southern California, known as USC, became involved in a dispute over language that appeared widely in U.S. and Chinese news stories.

It started with a white communications professor talking about small words or sounds that people use while speaking to signal pauses.

Because of the coronavirus health crisis, Gregory Patton was teaching the class online in a video conference. This fact may have added to the problem. 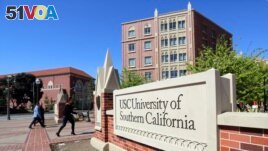 Patton advised his business school students that they should keep the pauses, but should avoid these "filler" sounds.

"Um" and "er" are examples of these sounds in English.

In the Mandarin Chinese language, Patton said, the word people often use to fill space between thoughts is "that." The word is pronounced "ne-ga," which sounds like an English word that is offensive to Black people. It is known as "the N-word" and is used to make Black people feel less than human.

Many students were surprised to hear the sound come from a professor.

Some Black students were upset and sent a letter to the school expressing their displeasure. They said the professor should have warned them that he was about to say a word that sounded like a bad word in English.

Patton, however, said he had used the example in classes before without complaint, so he did not think about warning students.

Tom Bartlett wrote a story about the incident for The Chronicle of Higher Education.

He said the complaints led to Patton being removed from the class for the rest of the term. Patton, however, was not dismissed by the school. He is still teaching at the university today.

Bartlett said one of the main issues to come out of the incident was Patton's desire to protect his reputation. He wanted to be sure the school would support him.

"He felt as if his reputation had been harmed by the fact that this became public, and the fact that he was being accused by some students of using a racist term."

"And they were bothered by the idea that a common word in Mandarin would be seen as by others, as, you know, potentially racist even though we know it was correctly pronounced by the professor. It became a big story in China in some ways, kind of a bigger story even than it was in the United States."

Since the class was online, it was recorded. When people saw the video of the class, they were not sure why the professor's class became a problem.

Guilherme Guerreiro is a journalism student at USC. He wrote about the story for The Annenberg School of Journalism's website. Guerreiro is originally from Brazil and English is his second language. He said it is important to remember that the story came after months of racial justice protests in the United States.

"It came out of the like the Black Lives Matter protests and all that...this story happened around August, like early mid-August, and the protests and had been going on, you know, June, July, et cetera, et cetera, so it came into the wake of that."

Guerreiro said "the country was at very critical point, a very delicate point," because of the summer of protests.

Bartlett was one of the first reporters to speak with Patton after the incident. He said the professor was worried that he might not be able to continue teaching students in the business school at USC. He apologized to students who were offended. Patton also said he would change his class so he would not use a sound that might make future students uncomfortable.

Reactions from newspapers to comedy

Some commentators thought the reaction by the students was extreme. Newspapers around the U.S., from Los Angeles to New York City wrote about it. The incident even became part of a late-night talk show.

Ronny Chieng is a comedian who appears on the Comedy Central program "The Daily Show." He speaks Mandarin.

In September, he spoke with the host of the program, Trevor Noah. Part of the show was called "Did That USC Professor Actually Say the N-Word?"

In the segment, the two comedians seemed to consider the objection by the students hard to understand and acted like they were upset with each other. Noah, who is Black, and was born in South Africa, even proposed that the Mandarin language, which has been spoken for thousands of years, should not have the word.

Harder to communicate by video call

After an investigation, the university found that Patton had not meant to offend anyone and did not break any rules.

Patton told Bartlett, the writer for The Chronicle of Higher Education, that he did not think the story would have turned out the same way if students had been taking the class in person.

Patton said he would have heard immediately from concerned students during the class instead of after he had completed the video class for the day.

Bartlett said: "He would have been able to see the reaction of certain students, and notice that they were uncomfortable, and perhaps followed up with them, they would have had an opportunity after the class perhaps to come up and talk to him..."

Bartlett added that, when communicating by video "it's harder in a Zoom environment to read the room, to, you know, be able to sort of sense what people are, how people are reacting."

While some may see the student group's reaction as extreme, both Bartlett and Guerreiro said there was value in USC's efforts.

Guerreiro said the school has learned about being more careful with language. "There are some grievances of the community with the university," he said, adding that USC has made efforts to answer student demands. "They are still changing things. They're still doing work. They created certain offices..." he noted.

Bartlett said the story from USC fits into a higher education discussion about whether professors and students should have the freedom to discuss difficult issues in their classes.

"There's a tension often between wanting to listen and take seriously the concerns of students. And then at the same time, say, you know, there may be things that are mentioned in the classroom that may challenge what you believe, may seem to be offensive, may bring up ideas that are, that might make you uncomfortable."

He added that, he thought, at the center of this case involving USC's Patton "was just a misunderstanding, really, that then got elevated to something else."

Bartlett said there are cases where universities need to consider what they teach. But this does not seem to be one of them.

"In other cases, there are, you know, some real substantive disagreements about what's appropriate, and what is going to potentially upset certain students and sort of cross the line and what is, you know, just a normal part of the education process. And I think that's an ongoing discussion."

pause- n. a temporary stop : a period of time in which something is stopped before it is started again

pronounce- v. to make the sound of (a word or letter) with your voice

reputation –n. the way people think about someone (usually of a person or group)

bother –v. to cause to feel troubled, worried or concerned

complaint- n. the act of saying or writing that you are unhappy or dissatisfied with something

offend- v. to cause (a person or group) to feel hurt, angry, or upset by something said or done

comedian- n. a person who performs in front of an audience and makes people laugh by telling jokes or funny stories

sensitive- adj. aware of and understanding the feelings of other people

grievance- n. a reason for complaining or being unhappy with a situation

elevate –v. the increase the level or importance of something

appropriate –adj. right or is correct for the situation