Update Required To play the media you will need to either update your browser to a recent version or update your Flash plugin.
By Susan Shand
29 January, 2018


Russian opposition leader Alexei Navalny has been released after thousands turned out to protest the upcoming March presidential elections.

He added, "Today has been an important day. We have shown that not all Russia is ready to accept the monarchy. . . Thanks to all those who were not afraid to fight for their rights."

Police arrested Navalny while he was on his way to a rally in central Moscow.

The protests were part of a nationwide "Voters Strike" called by Navalny. The opposition leader has been banned from running for president over legal problems. The move was seen as an attempt to keep him out of the race. 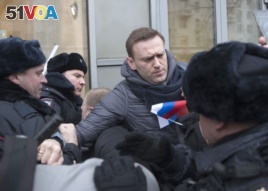 Vladimir Milov, an advisor for Navalny, told VOA "We demand a real contest."

He said that even supporters of Russian President Vladimir Putin questioned why Navalny is not permitted to participate in the election.

He added, "They believe Putin can beat Navalny, and we believe Navalny can beat Putin. That's what elections are all about."

Navalny and his supporters have called for a boycott of the election. They argue that a low number of voters will diminish a Putin victory. But it will prove that the government inflates his approval ratings.

Most protestors were younger Russians

Organizers said that protests took place in over 100 cities across Russia.

OVD-Info, a police-monitoring group, reported 340 people had been detained nationwide.

Most of the protestors were younger Russians, in their teens and early 20s.

Ivan Savin is a high school student who attended the rally. He said, "The authorities are used to thinking that Russians will just sit quietly and wait for change. Well, our generation won't wait. We want a better life."

He also admitted to telling his parents he was "out with friends" for the day rather than out protesting the Russian president.

His classmate, Valerie Koltsov, said that other friends felt the same way.

"I know a lot of people who don't come because it really does scare them. They think they'll get fined for not doing what the government tells them," she said.

Another candidate asks for support

Television host Ksenia Sobchak is running in the election against Putin. She asked the anti-Putin forces to voice their anger by supporting her "Against All" candidacy.

But Navalny's supporters have called her campaign a Kremlin trick to make the election appear fair.

In Moscow, Ludmilla Sidodova, a veteran of the massive pro-democratic movement of the late-Soviet period, argued real change required a much larger movement. She was among hundreds of thousands who once demanded change, and suggested a new generation could learn from that history.

She said, "I wish they'd understand that we did what we could. Maybe it wasn't always enough. But now it depends on them. Whatever life they decide they want is the life they'll have."

Charles Maynes reported this story for VOA. Susan Shand adapted the story for Learning English. Hai Do was the editor.

participate – v. to be involved with others in doing something: to take part in an activity or event with others

diminish – v. to be involved with others in doing something : to take part in an activity or event with others

inflate – v. to be involved with others in doing something : to take part in an activity or event with others

monitor – v. to be involved with others in doing something : to take part in an activity or event with others