Update Required To play the media you will need to either update your browser to a recent version or update your Flash plugin.
By Bryan Lynn
27 December, 2017


2017 was another big year for technology, with many new products launched to make our phones, homes and cars "smarter." But the news also included stories about technology companies seeking to earn back the public trust.

Social media giant Facebook was criticized for not doing more to prevent fake news stories from appearing and being shared. The criticism came after many false stories were posted on Facebook during the 2016 presidential campaign. Some blamed such stories for affecting the outcome of the 2016 election. 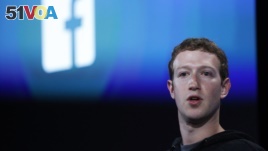 Later, Facebook said it found that a Russian-based operation had spent $100,000 to buy advertisements promoting political and social issues in the U.S. The company said it was investigating possible ways Russian sources may have influenced the election.

Facebook also came under criticism after several people posted videos of murders or suicides that remained for hours. CEO and co-founder Mark Zuckerberg called the videos "heartbreaking." In early May, Facebook said it was hiring an additional 3,000 people to help identify and remove violent and hateful content.

Apple celebrated the 10th anniversary of the first iPhone with the launch of its iPhone X. Like many other new phone models, it has a bigger screen area that covers the face from edge to edge. The iPhone X has no home button, supports wireless charging and includes new photo and lighting effects. 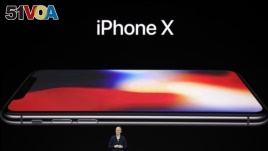 iPhone X was heavily publicized for its price of $999 and the new Face ID recognition system. Face ID replaces previous fingerprint recognition technology. Apple said its testing showed there is only a one-in-a-million chance of another person being able to unlock someone else's device with Face ID.

Apple also admitted to slowing some older iPhones. The company explained it only took the action last year to prevent battery-related shutdowns. Apple's action – and the company's decision to keep it secret - led to widespread criticism from industry analysts and lawsuits from iPhone users.

Volvo announced that beginning in 2019, all its new vehicles will have electric motors. The Chinese-owned company was the first major manufacturer to set such a date. Volvo says it will offer five fully electric vehicles between 2019 and 2021.

In France, officials said the country plans to ban the sale of gasoline- and diesel-powered cars across the country by 2040. German carmakers BMW, Audi and Volkswagen also have several new electric car and sport utility vehicles (SUV) in the works.

In the U.S., Ford said it would launch a new electric SUV by 2020, while General Motors began selling its popular Chevrolet Bolt in all U.S. states.

U.S.-based Tesla announced it would begin selling the much-awaited Model 3. Then last month, founder and CEO Elon Musk showed off the company's new electric-powered truck, called Tesla Semi. He said the truck will be able to travel 800 kilometers on a single charge while pulling a full load of 36,000 kilograms. Production is set to begin in 2019, with no price yet announced.

California announced it had approved testing of truly driverless cars. Previously, self-driving vehicle testing was only allowed with a driver to take over the car if something went wrong.

Officials said the change opened the door for self-driving cars to be widely sold and used throughout the state. Truly driverless vehicles could begin selling in California sometime in 2018.

Ride-sharing company Uber had a year of ups and downs that saw several major management changes. In a highly-publicized incident, CEO Travis Kalanick was caught on video arguing with an Uber driver. Several women also accused the company of allowing widespread sexual harassment and discrimination. 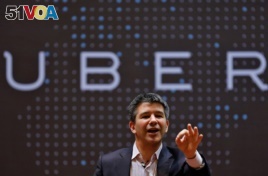 FILE - Travis Kalanick speaks to students during an interaction at the Indian Institute of Technology (IIT) campus in Mumbai, India, Jan. 19, 2016.

In addition, Uber faced legal action from Google, which claimed a former executive stole secrets about its self-driving technology. Kalanick ended up resigning his position and several other officials also left the company.

At Google, a male engineer wrote a memo suggesting there are biological differences preventing women from progressing the same as men in technology. The document – which also criticized Google's diversity efforts – was published online.

Google CEO Sundar Pichai apologized to employees for the memo, which he said had advanced "harmful gender stereotypes." The engineer was dismissed from his position.

The rise of bitcoin

We heard more about bitcoin in 2017 than ever before. This virtual currency shocked many in the financial world by rising from $1,000 in January 2017 to more than $19,000 in early December. 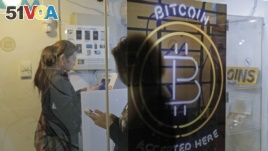 Japanese investors are believed to account for a large percentage of bitcoin trading, causing the cryptocurrency to reach record value. In Venezuela, as the national currency loses value, people have turned to bitcoin for daily uses. Even North Korea hackers joined in to steal millions of dollars to get around economic sanctions.

Bitcoin will continue to be watched in the coming year as more people buy it and the trading system further develops.

The U.S. Federal Communications Commission, or FCC voted to end the internet policy known as "net neutrality." The rules had prevented internet service providers from interfering with traffic from some websites while providing faster service to others.

Under the new rules, internet providers will be free to block competing applications. Service providers would also be able to slow down competing services or offer faster speeds to companies that pay more.

The government said the decision was based on its belief that net neutrality regulation was not necessary. Opponents said they feared lifting the rules would give businesses control over what users see and do online.

Robots to help and serve

One of technology's most active areas is robotics, and 2017 saw some exciting new developments.

Another robot led an orchestra performance, while several others carried food and other items to people. In Dubai, officials launched a police robot to guard the streets and offer help. Sophia, a robot integrating the latest technologies and artificial intelligence developed by Hanson Robotics is pictured during a presentation at the "AI for Good" Global Summit at the International Telecommunication Union (ITU) in Geneva, Switzerland ,Ju

Saudi Arabia even claimed to be the first country in the world to give citizenship to a robot. The female robot, named Sophia, was presented as an example of how robot technology and artificial intelligence will make machines more human-like in the future. The robot was even interviewed in front of a crowd.

Bryan Lynn wrote this story for VOA Learning English from earlier reports and other sources. Hai Do was the editor.

What technology stories did you find most interesting in 2017? Write to us in the Comments section, and visit 51VOA.COM.

harassment – n. the act of annoying, bothering or attacking someone

memo – n. a brief message written within a company

diversity – n. having people who are different sexes or races in a group or organization

stereotype – n. fixed idea people have about a particular type of person or group

virtual – n. something that can be done or seen using computers or the Internet instead of going to a place

cryptocurrency – n. digital currency that uses digital security measures to prevent it from being copied or misused