Update Required To play the media you will need to either update your browser to a recent version or update your Flash plugin.
By Hai Do
22 February, 2018

He commented one day after an emotional meeting with survivors of school shootings.

Trump repeated his call to permit some teachers to carry guns at schools. On Twitter, he wrote that "highly trained teachers would also serve as a deterrent" and the "ATTACKS WOULD END!"

Trump also tweeted: "I will be strongly pushing Comprehensive Background Checks with an emphasis on Mental Health. Raise age to 21 and end sale of Bump Stocks!" 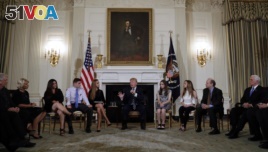 Trump's tweets and calls for action represent the strongest position on gun control from the president so far. But a White House official told the Associated Press that Trump was not supporting or ruling out any one policy.

During his presidential campaign, Trump embraced gun rights and received the support of the National Rifle Association, or NRA.

In his tweets Thursday morning, Trump repeated his support for the NRA. He wrote, "the folks who work so hard at the @NRA are Great People and Great American Patriots. They love our Country and will do the right thing."

Wayne LaPierre is head of the NRA. He spoke Thursday at the Conservative Political Action Conference just outside Washington, D.C. It was his first public appearance since the Parkland school shooting.

LaPierre did not address Trump's recent comments. But he did accuse Democrats of using the tragedy for "political gain." He said, "To stop a bad guy with a gun, it takes a good guy with a gun."

LaPierre said the same thing after the 2012 shooting at Sandy Hook elementary school in Newtown, Connecticut. Twenty six students and teachers were killed in that attack.

On Wednesday, the NRA said it would reject any proposal to raise the minimum age for buying a gun. In a statement, it said, "Legislative proposals that prevent law-abiding adults aged 18-20 years old from acquiring rifles and shotguns effectively prohibits them for purchasing any firearm, thus depriving them of their constitutional right to self-protection."

The current federal minimum age for buying or owning handguns is 21. But the limit is 18 for buying rifles -- including military-style assault weapons such as the AR-15 used in the Florida shooting.

Chuck Schumer is the Democratic Party leader in the United States Senate. He said the real test for Trump and the Republican-controlled Congress is "not words and sympathy, but action."

Schumer asked on Twitter, "Will President Trump and the Republicans finally buck the @NRA and get something done? Could this time be different?"

At the White House meeting on Wednesday, Trump listened to Samuel Zeif, a student at Marjory Stoneman Douglas High School in Parkland.

"I turned 18 the day after, I woke up to the news that my best friend was gone. And I don't understand why I can still go in a store and buy a weapon of war. An AR. I was reading today that a person, 20 years old, walked into a store and bought an AR-15 in five minutes with an expired I.D. How is it that easy to buy this type of weapon? How do we not stop this after Columbine? After Sandy Hook?"

Hai Do wrote this story for Learning English based on AP and other news reports. Ashley Thompson was the editor.

deterrent - adj. something that makes someone decide not to do something

embrace - v. to accept something or someone readily and gladly

prohibit - v. to order someone not to use or do something

buck - v. to oppose or resist