Update Required To play the media you will need to either update your browser to a recent version or update your Flash plugin.
By Hai Do
21 July, 2016

Trump defeated 16 other candidates to win the nomination.

The 4-day convention did not show as much unity as the nominee had hoped for. Trump's campaign spent the first two days of the convention explaining accusations of plagiarism over a speech given by his wife, Melania.

The speech contained similar sentences to ones in the speech given by first lady Michelle Obama at the 2008 Democratic Convention.

On Wednesday, Senator Ted Cruz of Texas spoke at the convention. He was Trump's strongest opponent in a race for the nomination that many observers considered very divisive.

Cruz refused to support, or endorse, Trump. Instead, he asked delegates to "stand, and speak and vote your conscience." 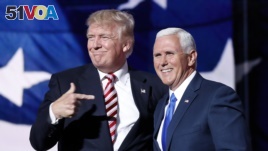 The controversy overshadowed the appearance of Indiana governor Mike Pence. He gave his acceptance speech as the party's vice presidential candidate.

Trump will face Hillary Clinton in the general election this November. Clinton is scheduled to accept the Democratic nomination next week at its convention in Philadelphia

Donald Trump has taken an untraditional path to win the nomination. He has never held a public office.

On June 16, 2015, Trump announced his candidacy from the lobby of his apartment building in New York. Trump said, "I'm really rich." And he added, "I will be the greatest jobs president that God ever created."

Trump has spoken about the unemployment rate in America. During the campaign, he has said China, Japan and Mexico have taken those jobs. He said Mexico and other Latin American countries have sent illegal immigrants to the United States.

Trump has been strongly criticized for saying, "They're bringing drugs. They're bringing crime. They're rapists." Trump promised to "build a great wall" on the border with Mexico to keep immigrants out and that he "will have Mexico pay for that wall."

Other candidates spent money to buy advertising during the primary elections. Trump spread his message and attacked opponents on free television, radio and social media. 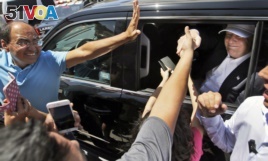 Supporters reach to great Republican presidential hopeful Donald Trump as he leaves a brief stop to speak to supporters and the media in Laredo, Texas, Thursday, July 23, 2015.

Trump has made many controversial comments during the campaign.

Speaking of Republican Senator John McCain, he said, "He's not a war hero. ... I like people who weren't captured." Senator McCain ran for president as a Republican in 2008. He was shot down during the Vietnam War and was tortured as a prisoner of war.

Many Democrats and Republicans condemned Trump when he called for a ban on all Muslims entering the United States.

Trump was born June 14, 1946, in Queens, New York. He graduated from the New York Military Academy and later completed a study program at the Wharton School of Finance at the University of Pennsylvania.

Trump started in business by working for his father who was a wealthy real estate developer in Queens. During New York's financial crisis, Trump received reduced taxes from the city to build a hotel in Manhattan. The deal was the first of many projects for the developer -- from casinos to golf courses. 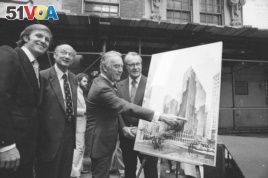 For a short period, Trump owned a sports team and a small airline company. In 1991, he sought bankruptcy protection when some of his businesses did not make enough money to pay the loans.

It was the first of four bankruptcy filings by Trump companies.

In the 1990s, Trump's name became a headline for New York's newspapers when he divorced his first wife, Ivana, and married Marla Maples, a little-known actress.

He is now married to Melania Knauss, a former model from Slovenia. The businessman has five children by three wives. plagiarism - n. the act of using another person's words or ideas without giving credit

overshadow - v. to cause (something or someone) less important

real estate - n. the business of selling lands and buildings