Update Required To play the media you will need to either update your browser to a recent version or update your Flash plugin.
By Susan Shand
29 July, 2019


When Boris Johnson became Britain's prime minister, the Turkish village of Kalfat held a celebration in his honor.

Johnson has studied members of his family over many generations. He learned that his great-great-grandfather was born in Kalfat in 1813. 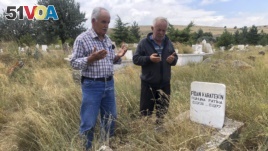 Adem Karaagac, left, and Satilmis Karatekin pray at the grave of a distant relative of Boris Johnson, in Kalfat, a village in the Cankiri province, 100 kilometers (62 miles) north of the Turkish capital Ankara, Turkey, July 25, 2019.

"We were honored that someone who has Ottoman genes, who comes from these lands, has become the prime minister," said Adem Karaagac, a former administrator.

Kalfat is home to about 1,300 people, many of them farmers. The village lies about 100 kilometers north of Ankara, Turkey's capital.

Villagers dismissed past comments by Johnson that sometimes were said to be anti-Muslim or against Turks. They said they hope that he will visit Kalfat while in office.

The old family home is still standing. The family members were known as the "Sarioglangiller," which means "of the family of the blond boy," Karaagac said.

Johnson is usually linked to the British upper middle class because of his family's wealth and his education at Eton College and the University of Oxford. Yet when asked about his ability to understand modern Britain's many ethnic groups and cultures, he often discusses his Turkish roots.

During a Conservative Party leadership debate in June, Johnson defended himself against claims he dislikes Muslims.

Johnson explored his Turkish roots in a 2008 program, a BBC genealogy show "Who Do You Think You Are?" When he visited Turkey as foreign minister in 2016, Johnson said his family was from Kalfat.

Satilmis Karatekin, a distant relative, said the village would look forward to seeing Johnson in the future. Stanley Johnson, the new prime minister's father, visited Kalfat about 10 years ago.

"An Englishman with Turkish ancestry has become the prime minister," said Karatekin. His grandmother, Fidan Karatekin, was related to Haci Ahmet Riza Efendi. "He (Johnson) may be English, but he carries Turkish blood," he added.

Haci Ahmet Riza Efendi's son, Johnson's great-grandfather, was the political journalist Ali Kemal. He lived in what then was the Ottoman Empire. Considered pro-British and a "traitor," Kemal was killed by a mob in 1922 during Turkey's war of independence.

Kemal's son, Osman Wilfred, was raised by his grandmother, Margaret Johnson, in Britain.

Johnson last visited Turkey in 2016, and he was warmly welcomed. Johnson has based his plan for Britain to leave the European Union on that possibility that millions of Turks could enter Britain if Turkey joined the EU. He also, famously, wrote a poem about Turkish President Recep Tayyip Erdogan. Many people considered it offensive.

Yet Erdogan was one of the first leaders to congratulate Johnson last week. He expressed hope the Turkish-British relations would grow under Johnson's government.

Asked about Johnson's comments on Turkey during the campaign to end Britain's EU membership, Kalfat's former mayor Mustafa Bal said: "he had to say such things...for political gains."

tribute – n. something that you say, give, or do to show respect for someone