Update Required To play the media you will need to either update your browser to a recent version or update your Flash plugin.
By Bryan Lynn
26 January 2021


Twitter has announced a new tool that permits users to identify information they believe is false or misleading.

The program is called Birdwatch. Twitter is first testing the program with a small group of approved users in the United States. The users will be able to write notes about tweets they consider untrue or that may contain misinformation.

In an announcement about the tool on Tuesday, Twitter said in the future, it plans to make the system available to all its users worldwide.

The program aims to have both experts and non-experts write notes. Twitter said in a statement that tests it carried out in the past had showed that "non-experts write concise, helpful and easy-to-understand notes." Such notes were often supported with "valuable expert sources," it added.

"Our goal is to build Birdwatch in the open, and have it shaped by the Twitter community," the statement said.

The system will use a kind of crowdsourcing similar to Wikipedia, where many different kinds of sources examine information appearing on the website.

Experts say that for the tool to be effective, the company will need to find ways to prevent misuse by people seeking to use Birdwatch to their advantage.

In an effort to prevent unhelpful notes or notes created by so-called internet trolls, Twitter plans to attach a "helpfulness" rating to each note. 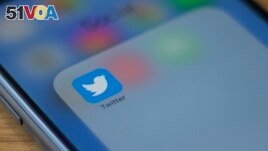 The Twitter logo is seen on a phone in this photo illustration in Washington, DC, on July 10, 2019. (AFP)

Twitter said Birdwatch would not take the place of other warnings and fact-checking operations it currently uses.

The company added it is attempting to make sure the tool is used by a large and diverse group of people. In choosing the first group of users, Twitter said it would seek to support accounts that seem "to follow and engage with different (users) and content than those of existing users."

Twitter and other social media companies have been seeking new ways to fight misinformation on their services. Even with the establishment of new rules and increased enforcement, false information about the U.S. presidential election and COVID-19 has continued to spread.

Twitter and the other services ban users for repeatedly violating their use policies. One of Twitter's most famous bans was issued against former U.S. President Donald Trump. The ban came after a violent mob led by Trump's supporters attacked the U.S. Capitol on January 6.

This week, Twitter announced it had permanently banned one of Trump's longtime supporters who had nearly half-a-million followers on the service. The supporter, Mike Lindell, heads a pillow company and is known in America for appearing in his company's television advertisements. He had helped finance protest movements aimed at overturning the election win of Joe Biden.

Twitter said Lindell had used his personal and company accounts to spread unverified claims of widespread voter fraud in the presidential election. U.S. courts had repeatedly rejected the baseless claims, even as Trump and his supporters continued to make false accusations about voter fraud.

In a statement to Reuters news agency, Twitter said it had permanently suspended Lindell's accounts because he had continually violated company policies on posting such content.

Bryan Lynn wrote this story for VOA Learning English, based on reports from The Associated Press, Reuters, Agence France-Presse and Twitter. Ashley Thompson was the editor.

concise – adj. short and clear; expressing what needs to be said without unnecessary words

source– n. the place where something comes from or starts at

to take advantage of – n. to treat someone badly in order to get something good from them

troll – n. a person who tries to cause problems on an Internet message board by posting messages that cause other people to argue, become angry

engage – v. to get and keep (someone's attention, interest, etc.)

pillow – n. a cloth bag filled with soft materials used to rest your head on in bed

verify – v. prove that something exists or is true

content – n. ideas contained in a piece of writing, a speech, a movie, or the internet