Update Required To play the media you will need to either update your browser to a recent version or update your Flash plugin.
By Mario Ritter
19 August, 2017


The World Health Organization (WHO) says breastfeeding is very important for the health of babies.

WHO officials say mother's milk should be the only food given to babies during the first six months of life. They advise that breastfeeding should continue in children up to two years of age. But that can be difficult for working mothers around the world.

In Uganda, parliament is supporting the act of breastfeeding by providing a free day care center for female lawmakers and the women who work for them.

Uganda's parliament has more than 150 women legislators. Many of them are at the age when they can give birth. Because of this, parliament members, including male legislators, have taken steps to help female members deal with their full-time job and motherhood. 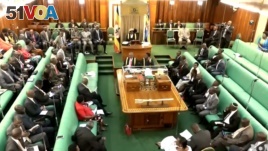 Uganda's parliament has offered a daycare for female lawmakers and staff.

"When I am coming very early, I don't even have to bathe my baby. I just get him out of sleep, put him in his car seat, lock the vehicle and we run up to here...I attend committee meetings. I attend (the) plenary in the afternoon, so I am always there, all the time."

The center has a room with cooking equipment, areas for babies to sleep and play, and a room for breastfeeding mothers. This room, Kadaga says, has helped female lawmakers stay active in parliament and solved many problems for them.

"In the past, one would either have to leave parliament and go back home, depending on where she lives, that would take time," said Kadaga. "Either she would have to do part of the work, or abandon the work altogether and come back tomorrow because the traffic alone, if you are traveling back and forth between the city and your home, it takes time."

Two women supervise the center, which is open to both parliamentarians and the women who work for them. Sheeba Namara takes her three-month-old baby to the center. She says it is good to know her child is so near.

"Just the comfort of being at work yet at the same time knowing that your child is safe and you can walk in anytime, is really the best service that could ever do."

The World Health Organization rates countries on policies that support breastfeeding in its Global Breastfeeding Scorecard. It says Uganda is among 23 countries where more than 60 percent of babies are fed only their mother's milk during the first six months.

Ugandan health officials say there are still many things that can be done to help mothers. These include enacting policies aimed at supporting breastfeeding and babies' health.

bathe – v. to wash (someone) in a container filled with water : to give a bath to (someone)

plenary – adj. describing a full meeting of all members of a group

abandon – v. to leave suddenly or without notice

afternoon – n. the middle part of the day

back and forth – adv. between two places or people

comfort – n. a state or feeling of being less worried, upset, frightened, etc., during a time of trouble or emotional pain