Update Required To play the media you will need to either update your browser to a recent version or update your Flash plugin.
By Susan Shand
09 January, 2018


A United Nations agency finds itself at the center of attention following criticism from Israel and comments by U.S. President Donald Trump.

Palestinian refugees receive humanitarian aid through the U.N. Relief and Works Agency for Palestine Refugees in the Near East (UNRWA). Money for the program comes mainly from voluntary donations by UN member states.

Earlier this week, Israeli Prime Minister Benjamin Netanyahu told his Cabinet the agency should be closed.

Netanyahu said that UNRWA works only for Palestinian refugees and makes the refugee problem worse. He wants its financing moved to the UN's main refugee agency.

"UNRWA must become a thing of the past," Netanyahu said. He said that the U.N. agency helps Palestinians believe they will get their land returned if Israel is destroyed.

The agency says as many as 5 million refugees can use its services. They are Palestinians who left their homes during the war that established Israel in 1948, or their descendants. 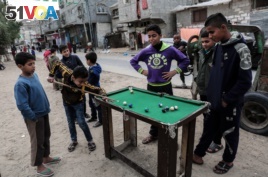 UNRWA spokesman Chris Gunness said the agency will continue its work until there is a "just and lasting solution" for the refugees.

"What perpetuates the refugee crisis is the failure of the parties to deal with the issue," Gunness said in a statement. He added, "This needs to be resolved by the parties to the conflict in the context of peace talks, based on U.N. resolutions and international law, and requires active engagement by the international community."

Efforts to support peace talks between Israelis and Palestinians have been unsuccessful for several years. Tensions between the two worsened last month when the United States recognized Jerusalem as Israel's capital.

President Trump's decision was a break from longstanding U.S. policy and the ideas of the United Nations. UN officials have long said the future of Jerusalem and a decision on Israel's capital are issues to be negotiated.

The Palestinians see East Jerusalem as the capital of a future state under a two-state solution.

Trump also threatened last week to cut millions of dollars in U.S. aid to the Palestinians. Netanyahu praised the president in his own comments Sunday.

Palestinian official Hanan Ashrawi rejected Trump's threat. She accused him of sabotaging the peace process and then blaming the Palestinians for "the consequences of his own irresponsible actions."

Ashrawi said further the Palestinians "will not be blackmailed."

Trump did not say exactly how much government aid would be cut.

The U.S. provides one-third of UNRWA's funding and provided more than $350 million to the agency in 2016.

Chris Hannas and Cindy Seine reported on this story for VOANews. Susan Shand adapted their reports for Learning English. George Grow was the editor.

engage – v. to discuss or to interact with

consequence – n. the result of a person's actions

blackmail – v. to demand money from someone in exchange for keeping information secret

descendant – n. someone related to a person or people who lived at an earlier time