Update Required To play the media you will need to either update your browser to a recent version or update your Flash plugin.
By Bryan Lynn
15 January, 2018


The United Nations is calling for urgent action to protect a whistled language used in a mountainous area of Turkey.

The UN's Educational, Scientific and Cultural Organization, UNESCO, has identified the "bird language" as an endangered cultural heritage. 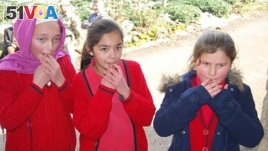 Children villagers practice the whistled language in the mountains of northern Turkey. (Ministry of Culture and Tourism of Turkey)

The UN agency placed much of the blame on the use of mobile phones.

A whistled language is a highly-developed method of communication. People use whistling sounds in place of words. The language was created as a way to communicate across great distances in difficult mountain conditions.

Most whistling sounds are created by blowing air through the lips and teeth. Sometimes fingers and the tongue are also used to make different or louder sounds.

To communicate, people use whistling to simulate, or create, the sound of some words. They also use sound patterns, repeating certain sounds, to represent other common words and expressions.

New words and terms can be added to keep up with changes in spoken language and cultural life.

UNESCO estimates the whistled language is spoken or understood by about 10,000 people in the Eastern Black Sea area of northern Turkey. However, only a small number of villagers still use the language. Currently, officials estimate it is mostly only spoken in a small community in Giresun province.

UN officials say members of the community consider the practice a major part of their cultural identity. They believe using the language helps strengthen interpersonal communication and solidarity.

UNESCO called whistled language "an environmentally friendly form of communication." It added the language can make life easier and "reinforce social bonds for the people living in the region."

With the new generation's lack of interest in whistled language, there is the risk it will eventually be "torn from its natural environment, becoming an artificial practice," UNESCO said.

In Turkey, at least one group has been formed to find ways to keep the whistled language strong. The group is working to create a plan for passing the language on to future generations.

It will also seek to raise international recognition of the issue. In addition, UNESCO said scientific research will be carried out to support efforts to continue the whistled language.

Other areas also have used whistled languages. In 2009, UNESCO expressed concerns about one such language disappearing from Spain's Canary Islands. The language, called Silbo Gomero, was based on Castilian Spanish. It was handed down from one generation to the next over many centuries.

UNESCO said it was the only whistled language in the world to be fully developed and practiced in a community of more than 22,000 people.

Would you be willing to learn a whistled language? Write to us in the Comments section, and visit 51VOA.COM.

whistle – v. to make a high sound by blowing air through your lips or teeth

pattern – n. a repeated form; something that happens in a repeated way

practice – n. something that is done often; a custom or tradition

solidarity – n. feeling of unity between people who have the same interests, goals, etc.

artificial – adj. not natural, but instead made by people