Update Required To play the media you will need to either update your browser to a recent version or update your Flash plugin.
By Jill Robbins and Greg Stachel
12 September 2020


Many colleges and universities across the United States have opened again after the summer vacation. But the school year looks different than it ever has before. Schools are taking new actions to fight COVID-19 infections on campus. Such actions include moving suddenly between in-person and online learning, punishing students for attending parties and testing local wastewater for the virus.

The state of Arkansas' Department of Health reports that the number of COVID-19 cases in the state among 18-to 24-year-olds rose by nearly 17 percent in the first week of September.

Dr. Jose Romero is the state's health secretary. He said, "We're clearly seeing what we believe to be a reflection of those cases in colleges and universities."

The number of active infections at the University of Arkansas' main campus is close to 1,000. Most of those with the virus are students.

The rise came days after the school moved to restrict on-campus events and off-campus parties. The school told students it would consider organizing or attending large gatherings without face coverings or social distancing to be a violation of student rules. 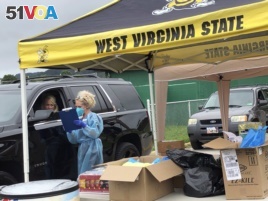 In Tallahassee, Florida, officials at Florida State University tested more than 3,000 students and employees over a one-week period. Twenty-one percent of those tested were confirmed to have COVID-19.

Shortly before the test period, pictures and videos of students attending parties had appeared on social media. In the images, the students do not appear to be following social distancing rules. Few are wearing face coverings.

In a statement, university officials asked local businesses to help slow the spread of disease by restricting students from gathering in large groups.

Another university in Florida, the University of Florida in Gainesville, is experiencing a similar infection rate. More than 21 percent of those who came to the student health center have tested positive for COVID-19.

Some schools seeing rises in case numbers have temporarily moved classes online. On September 8, West Virginia University canceled in-person classes for undergraduates at the university's main campus in Morgantown. The classes will be online through Sept. 25.

Dr. Jeffrey Coben is the school's Associate Vice President of Health Affairs and dean of the School of Public Health. He said in a statement that the temporary stop of face-to-face teaching would give the school time to watch the increasing number of cases. He noted that recent parties were a likely cause for the rise in infections. He said, "There is increasing evidence that crowded indoor gatherings, such as those that occurred over the weekend, can serve as super-spreader events."

One small college in the state of Illinois, Bradley University, is requiring all of its students to quarantine for two weeks. Officials said that classes would also return to online learning for a short time.

In order to test a lot of students at once, many schools are studying the wastewater from student living spaces. The tests can show whether there is any sign of the virus among the people living in a given building. The school can then ask those students to quarantine for a period of time.

Ryan Schmutz is a student at Utah State University. He recently received a text message from his school saying that COVID-19 had been found in his building's wastewater. University workers quickly took him and other students to a COVID-19 testing center.

Schmutz was then among 300 students who had to stay in their rooms for many days earlier this month.

"We didn't even know they were testing," the 18-year-old student said. "It all really happened fast."

Back at West Virginia University, or WVU, 29 students were recently forced to leave school because of COVID-19 related charges. School officials say the students took actions that could have put other students' health at risk. The university is considering taking other actions against the students, the WVU Today student newspaper reported.

The 29 students received the order to leave the school after their organization held a party. The organization was not connected to the university. Members of the organization had been ordered to quarantine because of existing positive cases.

The students received letters about not following school rules. They are no longer permitted to be on campus and they cannot take in-person or online classes, WVU Today reported.

One of the strongest punishments against students happened earlier this month at Northeastern University in Boston, Massachusetts. Eleven first-year students were sent home for gathering in a hotel room used for student housing. They were told they cannot return to school during the autumn term. The students and their parents are now fighting the severe penalty the students faced. University officials have said the students will not get their money back for the autumn term program they were taking part in, which costs $36,500.

Jill Robbins and Greg Stachel adapted this story from reports in the Associated Press, West Virginia University Today, and Reuters. Ashley Thompson was the editor.

For more information on words related to the coronavirus pandemic, please see this story: The Language of an International Health Crisis.

campus - n. the area and buildings around a university, college or school

reflection – n. something that shows the effect, existence, or character of something else

super-spreader - adj. of an event. a gathering of people that results in many infections (of a person: someone who infects a higher-than normal number of others with a disease)

undergraduate - n. a student at a college or university who has not yet earned a degree

What do you think of the actions the universities are taking to fight COVID-19? We want to hear from you. Write to us in the Comments Section.