Update Required To play the media you will need to either update your browser to a recent version or update your Flash plugin.
By Dan Friedell
14 August 2021


When a person in the United States gets the COVID-19 vaccine, the person receives a small piece of paper called a "COVID-19 Vaccination Record Card."

It is a piece of paper with the logo of the Centers for Disease Control and Prevention, or CDC, and the name and date of the vaccine. Because it is so simple, it could be easy to fake.

Many people in the U.S. are still unsure about getting the vaccine. As universities, workplaces and other places are requiring proof of vaccination, some people are now buying fake vaccination cards without getting a shot.

The Associated Press reports that students and teachers at universities around the U.S. are worried about fake cards. Sellers are using social media apps like Instagram and Telegram to advertise fake vaccine cards. The prices range from $25 to $200. The AP notes that many college students seem interested in buying the cards.

On the site Reddit, one person wrote: "I need one, too, for college. I refuse to be a guinea pig."

A person on Twitter said his daughter bought a different kind of fake document from someone in China for $50. He asked if people were doing the same thing for vaccination cards. 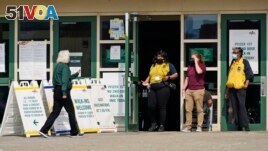 The Chronicle of Higher Education is a publication that follows college and university news. It reports that more than 700 universities and colleges require proof of vaccination. Most schools simply ask their students to take a photo of their card and send it to a school website.

Vanderbilt University in Nashville, Tennessee, is not permitting students to register until they show a record of being vaccinated. At the University of Michigan, a spokesman said the school does not believe students have sent in fake cards.

Benjamin Mason Meier is a professor at the University of North Carolina at Chapel Hill, UNC. He studies international health policy. He said, unlike some countries, the U.S. is not using a digital system to record vaccine status. He said the U.S. is depending on "a flimsy paper card," and students have told him they knew of others who had used fake vaccination cards.

In a statement to the AP, UNC said it has not found evidence that students are sending in fake vaccine record cards.

Rebecca Williams also works at UNC. She is a researcher at the school's Center for Health Promotion and Disease Prevention. She said she is not surprised that people are worried about fake vaccine cards. "This is why I think the development of a reliable national digital vaccine passport app is very important," she said.

Michael Uhlenkamp is a spokesman for the chancellor's office for the California State University system, which has almost 500,000 students. With anything that requires certification, he said, "there is the possibility for an individual to falsify documentation."

There is a law that should prevent people from making false vaccine cards. If someone uses the CDC logo without permission, they can be fined and punished by up to five years in prison. The U.S. Department of Justice recently charged a person in California with making fake vaccination cards.

The top law officer in 47 states also asked the leaders of Twitter, Shopify and eBay to remove ads for fake cards, which they did. Sellers, however, quickly returned with different search words. And fake cards are still easy to find online.

Dr. Sarah Van Orman is the chief health officer at the University of Southern California and an advisor with the American College Health Association on COVID-19. She said even if students can get into universities with fake vaccination cards, the number will not be high enough to affect the school's herd immunity.

College students who already have the vaccine are criticizing those who would rather spend money to buy a fake than get a free shot.

Maliha Reza is an electrical engineering student at Pennsylvania State University. She called those students "dumb."

"I'm angry about that," she said. "Like, there is more anger than I could describe right now."

Roselyn Romero wrote this story for the Associated Press. Dan Friedell adapted it for Learning English. Susan Shand was the editor.

What would you do if you were in charge of a university, and you thought students were using fake vaccination cards? Tell us in the Comments Section and visit 51VOA.COM.

logo –n. a symbol that is used to identify a company and that appears on its products

fake –v. to make (something) seem real or true in order to trick someone

guinea pig –n. a symbol that is used to identify a company and that appears on its products

reliable –adj. able to be believed : likely to be true or correct

app –n. a computer program that performs a special function

certification –n. official approval to do something professionally or legally

herd immunity –n. a group of people who develop resistance to a disease due to either vaccination or already being sick

dumb –adj. not showing or having good judgment or intelligence : stupid or foolish