Update Required To play the media you will need to either update your browser to a recent version or update your Flash plugin.
By George Grow
06 August, 2018


Police in Bangladesh fired tear gas and rubber bullets on Monday to break up demonstrations.

Protesters said at least 40 people, many of them students, were injured.

The protesters are demanding better enforcement of traffic safety laws and better protection for those traveling by foot near schools.

Hundreds of students clashed with police in the Bashundhara area of Dhaka, the capital. The area is home to a few private universities.

Police used tear gas against protesters at Dhaka's East West University. Another group of students marched across the grounds of Dhaka University. They called for justice and criticized the government.

A week of demonstrations

Tens of thousands of people have taken part in the demonstrations since they began last week.

The protests started after two students were killed by speeding buses. Other students took to the streets, mainly in places where traffic accidents happened. The protesters stopped vehicles and asked drivers for their operating permits. Others directed traffic themselves, in some cases separating heavy vehicles from light ones.

Some protesters threw stones at police officers and attacked vehicles. Home Minister Asaduzzaman Khan Kamal told reporters that more than 300 vehicles have been damaged. Some reportedly had been set on fire.

Abdus Shabbir, an emergency room doctor, told the French news agency (AFP) his hospital had treated more than 100 students on Saturday. He said that some had injuries that could have resulted from rubber bullets. Police have denied firing such bullets at the protesters. 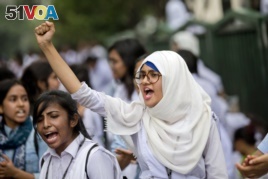 Bangladeshi students shout slogans as they block a road during a protest in Dhaka, Bangladesh, Saturday, Aug. 4, 2018.

On Sunday, plainclothes police officers arrested Shahidul Alam, an activist and well-known photographer for his comments on Facebook and in other media.

Alam told a television broadcaster that Prime Minister Sheikh Hasina has no credibility and was using "brute force" to stay in power. A police official told the French news agency that the activist would face legal action.

The rights group Amnesty International called for Alam's immediate release. Omar Waraich is Amnesty's deputy director for South Asia. He said in a statement that the arrest "marks a dangerous escalation of a crackdown by the government."

Bangladeshi officials have warned of stronger measures if the protests are used to create unrest.

On Monday, Bangladesh's Cabinet expressed support for a proposed law. Under the proposal, the maximum punishment for an accident leading to death could be five years in jail, up from the current three years.

The prime minister has promised to act on the students' list of nine demands, one demand at a time. Their demands include bringing to justice those responsible for the recent traffic deaths; releasing students arrested in the protests; and building footbridges near all schools.

Julhas Alam reported this story for the Associated Press. George Grow adapted his report for VOA Learning English. His story includes information from VOANews. Mario Ritter was the editor.

photographer – n. cameraman; someone who uses a camera to take pictures

credibility – n. the quality of being accepted as honest or true

escalation – n. the state of becoming more intense or worse

crackdown – n. a campaign or attempt to punish someone for violating the law