US Again Places Full Restrictions on Iran for Its Nuclear Program

Update Required To play the media you will need to either update your browser to a recent version or update your Flash plugin.
By Mario Ritter
05 November, 2018

Iranian President Hassan Rohani said on Iranian television Monday that his country would try to continue to sell oil to break the U.S. sanctions.

Rouhani added that his country would resist efforts to punish it for its disputed nuclear program. Western nations say Iran aims to build nuclear weapons.

Rouhani added, "We are in the economic war situation."

Eight governments have received temporary permission to continue to import Iranian oil. They are China, Greece, India, Italy, Japan, South Korea, Taiwan and Turkey. Those governments make up a majority of Iran's oil exports. It is not clear when the special permission will end.

U.S. Secretary of State Mike Pompeo also commented, saying Iran had a choice. "It can either do a 180 degree turn from its outlaw course of action and act like a normal country, or it can see its economy crumble," Pompeo said.

Iran is already facing an economic crisis. Over the last year, the exchange value of Iran's currency has dropped sharply against the U.S. dollar. A lack of jobs and high prices have also led to major protests.

The restrictions officially end all economic gains the U.S. permitted Iran after the nuclear agreement of 2015. The U.S., Britain, China, France, Russia and Germany signed that agreement, along with Iran.

But President Donald Trump announced last May that the U.S. would withdraw from the agreement. Trump said the deal permitted Iran to continue its secret development of nuclear weapons and gave it money to support violence throughout the Middle East. 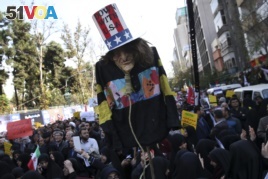 An effigy of U.S. government icon "Uncle Sam" is held up by demonstrators during a rally in front of the former U.S. Embassy in Tehran, Iran, on Sunday, Nov. 4, 2018, marking the 39th anniversary of the seizure of the embassy.

Supporters of the agreement say Iran remained compliant with the deal. And, they say, the agreement was the best way to slow Iran's nuclear development.

In a statement Friday, Trump said the purpose of re-imposing sanctions is to force Iran's leaders to end the country's "destructive behavior." If Iran fails to do this, he said, it would "continue down the path toward economic disaster."

On Sunday, some Iranians marked the 39th anniversary of the seizure of the U.S. embassy in Tehran in 1979. Iranian revolutionary activists held more than 50 Americans hostage for 444 days.

Chris Hannas and Cindy Saine reported this story for VOA News. Mario Ritter adapted it for VOA Learning English with addition material from AP. Kelly Jean Kelly was the editor.

sanction –n. measure put in place to cause a country to obey international law, usually by limiting or banning trade

entities –n. a group that exists by itself that is separate from others

crumble –v. to break down completely

re-impose –v. to cause something such as a rule or punishment to again affect a person, group or country