Update Required To play the media you will need to either update your browser to a recent version or update your Flash plugin.
By Hai Do
16 October 2020


The United States Food and Drug Administration (FDA) has approved the world's first treatment for the deadly Ebola virus.

The treatment, Inmazeb, is a combination of three genetically-engineered antibodies. The company Regeneron Pharmaceuticals developed it to treat both young and old patients with the virus version called Zaire Ebola. It is the deadliest kind of Ebola known to infect humans. Zaire Ebola usually kills 60 to 90 percent of patients.

FDA officials announced the approval of Inmazeb on Wednesday.

The Zaire Ebola virus can spread easily through direct contact with body fluids of infected people or animals. Signs of the disease include increased body temperature, pain, stomach sickness, kidney and liver damage, and bleeding. People who provide care to infected individuals are at highest risk of contracting the virus. 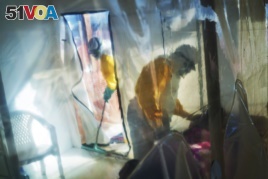 Regeneron's drug was one of four tested during a Zaire Ebola outbreak in Congo between 2018 to 2019. The outbreak killed almost 2,300 people.

The study involved 681 people infected with the virus. After four weeks, about one-third of 154 patients who received Inmazeb had died. Similar results were reported for a group that got a different drug. But, about half the patients died among the other two groups given one of the other two drugs.

The study ended early last year so all patients could get Inmazeb.

Leah Lipsich leads Regeneron's infectious diseases program. She said, "When you have three drugs that bind to the (virus), there's a low probability that the virus can evade all of them."

Lipsich noted that the FDA's approval will make it easier for the company to get permission to use the drug during outbreaks in African countries.

George D. Yancopoulos is Regeneron's chief scientific officer. He said the drug maker is using the same technology to develop an antibody drug to treat COVID-19. He said in a statement, "we hope this will be one of many demonstrations of how the power of science can be successfully deployed against dangerous infectious diseases."

The antibody combination technology has also been used to develop drugs to treat HIV, the cause of AIDS. Regeneron and drug maker Eli Lilly are now asking the FDA to permit emergency use of experimental engineered antibody medicine to treat patients with COVID-19.

The FDA approved the first vaccine for Ebola last December. That drug, Ervebo, is made by Merck

Hai Do wrote this story for Learning English with information from the FDA, Regeneron and the Associated Press. Caty Weaver was the editor.

outbreak - n. a sudden start or increase of disease

bind - v. to tie or wrap something

evade - v. to avoid or stay away