Update Required To play the media you will need to either update your browser to a recent version or update your Flash plugin.
By Phil Dierking
20 January, 2018


A United States Army dog has been recognized for his actions during the Allied invasion of Sicily in World War II.

A dog named "Chips" was posthumously awarded the PDSA Dickin Medal earlier this week at a ceremony in London. The medal recognizes the heroic actions of animals serving in military conflict.

The award is presented by a British group: the People's Dispensary for Sick Animals.

Chips' life began as a much loved pet of the Wren family in Pleasantville, New York. A neighboring family offered the dog to the Wrens when he was a puppy.

John Wren, who was a young boy at the time, remembers his parents' reaction to the small animal.

"The runt of the litter was this German Shepherd-husky mix thing. And they said to my mother, ‘Would you like him?' And she said, ‘I'd love to have him.' So, she took him, and she named him Chips. And he responded well, and he was smart and obeyed well. And then the war effort came on, and they asked for canines, or dogs, to go into the K9 Corps. And they thought he was a perfect fit for it. Although they were sorry to have to do it, they knew it was the right thing to do. And they did it..."

Chips easily passed his military entrance tests. He then joined the Third Infantry Regiment of the Seventh U.S. Army and was sent to North Africa. 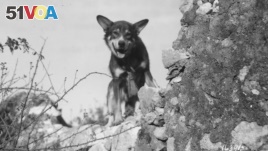 A U.S. Army dog, Chips, who saved the lives of his platoon during the Allied invasion of Sicily in 1943 was posthumously awarded the PDSA Dickin Medal on Jan. 15, 2018.

The same year in July, Chips joined "Operation Husky," the Allied invasion force landing on the Italian island of Sicily.

Lieutenant Colonel Alan Throop spoke at the award ceremony on Monday. He said that during the invasion, enemy forces shot at and attacked Chip's team. Throop said the dog broke away and forced the surrender of the enemy machine gun team.

Chips' handler described how the dog entered the machine gun shelter, and came out with his jaws around the neck of a German soldier. Chips' handler had to tell the dog to stop before the man was killed.

During the incident, Chips suffered burns and injuries, but survived. He also saved the lives of the soldiers in his platoon.

Later, the army awarded Chips the Silver Star and nominated him for the Distinguished Service Cross. However, the medals were later withdrawn after criticism that they were not meant for animals.

Chips survived the war and returned to the United States.

John Wren, who was four at the time, was there to welcome Chips when he arrived.

More than 70 years later, Chips finally received an award for his actions.

At the ceremony on Monday, Ayron, a U.S. military working dog based in Britain, and Throop accepted the award on Chips' behalf. The presentation took place at the Churchill War Rooms, named after the former British prime minister. Winston Churchill's great-grandson, Randolph Churchill, attended the ceremony.

Wren said he is thankful for the Dickin Medal.

"It's just a nice way of honoring a war hero," he told VOA.

Henry Ridgwell reported this story for VOANews. Phil Dierking adapted his report for Learning English. George Grow was the editor.

Do you animals should receive awards for heroic actions? We want to hear from you. Write to us in the Comments Section or on 51VOA.COM.

distinguished - adj. known by many people because of some quality or achievement

behalf - n. as a representative of someone

handler - n. a person who trains or controls an animal

jaw - n. either one of the two bones of the face where teeth grow

platoon - n. a group of soldiers that includes two or more squads usually led by one lieutenant

pet - n. an animal that people keep mainly for pleasure

runt - n. the smallest animal in a group that is born to one mother at the same time