Update Required To play the media you will need to either update your browser to a recent version or update your Flash plugin.
By Bryan Lynn
09 June, 2019


The first U.S. astronauts chosen to fly on a private spaceship to the International Space Station, or ISS are preparing for the planned trip later this year.

The two astronauts, Bob Behnken and Doug Hurley, recently spoke with the Reuters news agency in Houston, Texas. They met at the Lyndon B. Johnson Space Agency, where NASA, the United States' space agency, trains astronauts for spaceflight.

Behnken and Hurley spoke about their preparations and recent tests of the spacecraft that will carry them to space.

The two men will fly on the Crew Dragon spacecraft, which was built by private American company SpaceX. In March, the Crew Dragon completed a successful six-day unmanned test mission to the ISS. The spacecraft returned safely to Earth, landing in the Atlantic Ocean, and was recovered several days later.

But during a ground test carried out on April 20, the same Crew Dragon capsule exploded. The test involved a system designed to propel the spacecraft and its crew to safety in the event of a launch failure. SpaceX is leading the investigation into the April accident. The company has called the explosion, an "anomaly." 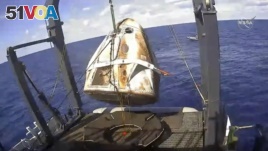 In this March 8, 2019 file image taken from video made available by NASA, the SpaceX Crew Dragon capsule is hoisted onto a ship in the Atlantic Ocean off the Florida coast after it returned from a mission to the International Space Station.

Behnken and Hurley both flew on NASA's space shuttles. They told Reuters the test failure represents "part of the process." They noted that the Crew Dragon technology is far more developed than what was used in the space shuttle program, which ended eight years ago.

The two Americans are set to travel on the first manned Crew Dragon flight to the ISS later this year. The rocket will be launched from Cape Canaveral, in Florida.

Some experts believe the accident investigation and design delays may push the launch into 2020. But the astronauts say they have trust in the abilities of the space vehicles being developed in partnerships between NASA and private companies. They also said the business of space flight was not always well-ordered or clean.

"People to a degree think it's pretty glamorous to be able to go into space, but it's actually like a messy camping trip," Hurley told Reuters.

Behnken said the astronauts have received valuable information from SpaceX about the investigation of the accident. "In general, the anomaly that happened to us in the past, that's the best kind because we'll figure that one out... and we'll make sure that that's not going to happen again," he said. "We're the risk-takers, and being informed on that risk is super important as well."

Mike Hopkins is another astronaut who was chosen for a later mission aboard the Crew Dragon with astronaut Victor Glover. Hopkins spoke about the latest difficulties in the ground tests. "This is part of the process. It's not surprising that it's happened," he said. "We all wish that we haven't had some of these issues, but ... as long as you've got a good process, a good team put together, you can get through them."

The Crew Dragon and the Falcon 9 rocket that carry it into Earth's orbit are both SpaceX creations. The first successful crewed launch will mark a major step forward in NASA's plans to use private companies to fuel future space travel.

The space agency is paying SpaceX and U.S.-based Boeing a total of $6.8 billion to build competing rocket and capsule systems to send astronauts into space. Since NASA ended its space shuttle program in 2011, U.S. astronauts have used Russian-launched spacecraft to get to the ISS.

Boeing plans to launch its Starliner capsule, without a crew, sometime this year, followed by a later mission with astronauts. The Starliner is designed to return to Earth on land, not sea.

Alan Devall reported this story for the Reuters news agency. Bryan Lynn adapted it for VOA Learning English. George Grow was the editor.

propel – v. to push or move something with a lot of force

anomaly – n. something that is unusual or that does not seem right

confident – adj. very sure about your ability to do things well

glamorous – adj. attractive in an exciting and special way