US Colleges Have a Mix of Plans for Coronavirus Testing

Update Required To play the media you will need to either update your browser to a recent version or update your Flash plugin.
By Pete Musto
01 August 2020


For students going to Colby College in Maine next month, coronavirus testing is expected to be a normal part of campus life.

Colby will require all students to take a coronavirus test every other day for two weeks, and then two tests a week after that. The college says it will provide up to 85,000 tests over the next four months. That is nearly as many as the entire state of Maine has provided since the health crisis started.

Colby is a private college of 2,000 students. It joins a growing number of colleges and universities in the United States announcing aggressive testing plans to identify COVID-19 cases before they spread. Harvard University says all students living on its campus will be tested when they arrive and then three times a week. Boston University plans to test most students at least once a week.

But whether schools should be testing every student — and whether they actually have the ability to do so — is a subject of debate. Some colleges plan to test students only if they show signs of the virus or come in close contact with someone who has tested positive. But some researchers say that plan could quickly lead to infections caused by students who show no signs of the disease.

As universities hurry to make plans for virus testing, U.S. federal officials are warning that they could overload laboratories that process tests for hospitals. In a call with governors, Health and Human Services Secretary Alex Azar said too many colleges are agreeing to deals with private laboratories. This threatens to "jam up" the system, he said.

Instead, Azar said colleges should develop testing operations in their own laboratories, especially at big research universities.

College officials have been announcing testing plans as they work to ease concerns that they can reopen safely. For some, it is partly meant to show that officials will spend whatever it takes to keep their campuses protected.

Doug Terp is vice president for administration and chief financial officer at Colby College. He told The Associated Press that Colby's testing plan will cost an estimated $5 million.

"It's first and foremost to provide a safe environment. But truthfully, it's also to give all of us comfort, to give our local community comfort, and to give our students and families comfort," Terp said. 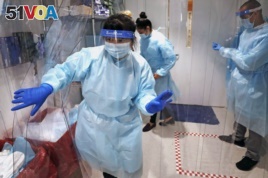 But at the University of North Carolina in Chapel Hill, officials question the value of such a plan. They argue that testing every student could "create a false sense of security." Instead, the university plans to test students who show signs of the coronavirus or come into contact with it, and those in high-risk groups.

Virus testing is just one of many safety measures colleges are planning as they look to reopen. Many plan to reduce class sizes, limit the numbers of students living in on-campus housing, require face coverings and ban large gatherings. By testing, colleges hope to identify sick students and separate them from healthy ones to prevent the spread of the virus.

For months, college and university leaders have argued that testing is extremely important to a safe reopening next month. But with limited guidance from federal officials, colleges have created a mix of plans based on advice from state agencies and on research from their own health experts.

The Texas A&M University system recently announced that it will divide 15,000 tests among its campuses each month. The tests will only be given to those who show symptoms or come into contact with known cases. Harvey Mudd College near Los Angeles and Macalester College in Minnesota have similar plans.

Some universities plan to test students when they arrive. But after those tests, they plan to target students with symptoms. Other schools say they will test random samples of students, while some plan to test all students at some point in time.

The Centers for Disease Control and Prevention (CDC) urges against widespread testing. It says colleges should mainly test students with symptoms. The CDC says broader testing should be considered only in areas with higher virus transmission rates.

But researchers warn that depending on symptoms alone will not be enough. They say many young people carry the virus but never feel sick. Without recognizing those cases, they say, the virus could quickly spread out of control.

Recently, a Cornell University research team found that students would need to be tested every seven days to keep infections down. A separate study from Yale University and the Harvard Medical School suggested that testing only once a week could lead to thousands of infections over a college term.

The risk that students could arrive on campus carrying the virus without knowing it is of special concern to college and university officials. Some are asking students to get tested before they arrive. Ithaca College in New York recently announced plans to bar students from more than 20 states with higher virus rates.

Even with testing, several colleges have already seen infections spread among sports team members and other students who returned to campus this summer. The University of North Carolina suspended training for its football team this month after 37 players and other people with links to the team tested positive.

Collin Binkley reported on this story for The Associated Press. Pete Musto adapted it for VOA Learning English. George Grow was the editor.

overload – v. to cause something to be used for too many things at the same time

jam up – p.v. to cause something to stop working correctly

comfort – n. a state or feeling of being less worried, upset, or frightened during a time of trouble or emotional pain

symptom(s) – n. a change in the body or mind which indicates that a disease is present

random – adj. chosen or done without a particular plan or pattern

sample(s) – n. a small amount of something that gives you information about the thing it was taken from