US Educators Re-examine How Black History Is Taught in Schools

Update Required To play the media you will need to either update your browser to a recent version or update your Flash plugin.
By Ashley Thompson
23 June 2020


For years, Americans talked little about the killing of hundreds of people in Tulsa, Oklahoma, nearly a century ago. When they did talk about the violent incident they called it the Tulsa race riot.

The incident happened over a period of 16 hours, from May 31 to June 1, 1921. It took place in a part of Tulsa where Black Americans operated successful businesses. Mobs of white people attacked Black locals and businesses in an area known as "Black Wall Street."

Under new rules developed by teachers, Oklahoma students are urged to consider the differences between calling the incident a "riot" and a "massacre" -- the violent killing of many people. Yet Oklahoma's state laws use the word riot when describing the violence.

The state's new education guidelines are taking effect as a national discussion on racial injustice brings attention to how Black history is taught in schools.

There is no national set of rules on how to teach Black history in the United States. A small number of states have laws requiring that the subject be taught in public schools. Each state sets its own education requirements. History classes often make note of slavery, the rise of Jim Crow laws and the civil rights movement.

Some experts and educators say Black history lessons spend too much time telling about violence and suffering, instead of the systemic parts of racism and white supremacy. But others say past unrest and injustices are not explained enough.

In Texas, the Board of Education recently approved a class on African American studies for high school students. A University of Texas professor involved in developing the course, Kevin Cokley, said his college students say they were taught a sanitized version of Black history in high school.

"Most of my students indicate they did not learn the specifics of slavery that I provide them in my course," said Cokley. "Oftentimes they are shocked and angered to find they were not taught the information I am sharing with them." 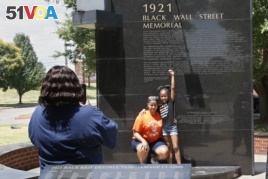 Oklahoma schools have been required to teach about the 1921 Tulsa massacre since 2002.

The massacre largely was not discussed in Oklahoma until a group was formed in 1997 to investigate the violence. The group is led by Kevin Matthews, a state senator from Tulsa and a member of the Democratic Party. Matthews said the new teaching rules have not faced opposition. But he noted that some people have said they would rather leave the massacre in the past.

"Older people called me and said, ‘Why do you want to bring this back up, this dirty secret?'" he said.

Matthews said his grandmother was a young girl in Tulsa during the massacre, but she never told him about the violence. He learned about it as an adult from his grandmother's brother.

"It was like a movie," Matthews said. "I couldn't believe it happened here."

LaGarrett King is director of the Carter Center for K-12 Black History Education at the University of Missouri. He says he believes there is too much attention being placed on violence in Black history lessons.

King provided training last year for 300 educators who are interested in teaching Black history. He expects an online training program this summer to have more attendees than usual. That, he says, makes him hopeful.

But he notes that history still needs to be presented differently. For example, he said, the country as a whole does not recognize "Juneteenth" as a holiday. June 19 marks the day in 1865 that the last enslaved black Americans learned they had been freed.

"White people don't acknowledge Juneteenth, but yet we're supposed to be a country that believes in freedom," King said. "We have been taught July 4, 1776, is the real Independence Day, but it's not. The vast majority of black people were still enslaved."

Lawrence Paska is executive director of the National Council for the Social Studies. He said schools should be preparing to help students work through questions about discrimination, protests and racial violence when they return three months from now.

"Do we have a curriculum that is responsive to the needs and experiences of the students we have now?" Paska said. "That is an important question schools need to be asking."

Jim Crow - n. the former practice of segregating, or separating, black people in the U.S.

lesson - n. an activity that you do in order to learn something

sanitize - v. to make (something) more pleasant and acceptable by taking things that are unpleasant or offensive out of it

indicate - v. to show (something)

acknowledge - v. to say that you accept or do not deny the truth or existence of (something

curriculum - n. the classes that are taught by a school, college, etc.

responsive - adj. reacting in a desired or positive way