US Farmers Not Persuaded on Fast Change to Electric Cars

Update Required To play the media you will need to either update your browser to a recent version or update your Flash plugin.
By Susan Shand
20 April 2021


The United States might be about to make a large change: Away from cars that need gas to electric cars. However, biofuel companies and their supporters in Congress say "no." They want to increase the sales of gasoline with biofuels added, not leave it behind.

President Joe Biden has proposed a plan that includes billions of dollars to pay for 500,000 electric car power stations. Money is also being spent to electrify public cars and repair the nation's electricity system. The plan seeks to copy moves in California and some other states to force the sale of electric cars. General Motors recently announced it would make only electric cars by 2035.

Yet any move from gasoline or biofuel cars to electric ones would happen slowly in the U.S. That is because there are currently 279 million non-electric cars. Producers of biofuels says their products will be needed for a long time.

The government's plan for electric cars comes as the U.S. works to reduce carbon emissions that are blamed for climate change. The Environmental Protection Agency says cars on the road make up a large share of U.S. gas emissions from transportation.

The U.S. also wants to compete in the worldwide electric car market.

LMC Automotive is a research company that follows the car industry. It predicts that more than 1 million electric cars will be sold in the U.S. in 2023. The company says that will rise to over 4 million by 2030. But that is less than one fourth of normal yearly new car sales. Electric cars are now less than 2 percent of new sales.

A recent study from Harvard and Tufts universities found that ethanol gives off 46 percent less carbon than gasoline. Biofuel makers say it is important that the country has increased biofuel production.

Geoff Cooper is head of the Renewable Fuels Association in St. Louis. He said using ethanol is an easy way to reduce carbon emissions and slow climate change. Right now, normal gasoline is mixed with 10 percent ethanol. He wants that percentage changed to 15.

He said that it will take many years for gas-powered cars to disappear from American roads.

"Why not take steps now to reduce the carbon intensity of those liquid fuels?" Cooper said. 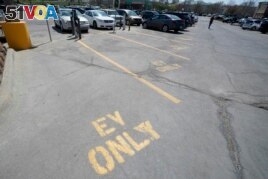 Senator Charles Grassley said last autumn that a plan by some democrats to end the sale of gas cars by 2035 would hurt Iowa.

Iowa Senator Joni Ernst argues that the $7,500 tax reductions for Americans buying electric cars usually go to rich people in eastern and western states. She says the tax credits are helping an industry that hurts farmers.

"I firmly believe Iowa taxpayers shouldn't be footing the bill for millionaires to get a discount on luxury cars," Ernst says on her Senate website.

Many farmers see the change to electric cars as a threat. They do not believe state and federal officials will protect rural economies.

"It's like you're almost helpless," said Ed Wiederstein. He is a partly-retired farmer near Audubon in western Iowa.

Over time, a move to electric vehicles likely will force farmers to plant other crops, said Chad Hart. He is an agriculture economist at Iowa State University.

"Agriculture is always shifting the crop mix to fit whatever markets offer the best opportunity," he said.

biofuel – n. a fuel made from biological material such as wood, ethanol or vegetable oil

emissions – n. the act of producing or sending out energy or gas from a source

ethanol – n. a form of alcohol

refinery – n. a place where unwanted substances are removed from products like oil or sugar

luxury – adj. something that is expensive and not necessary

shift – v. to move or cause to move to a different position

opportunity –n. a time or chance that something can be done