Report: US Is Largest Source of Illegal Guns in Brazil

Update Required To play the media you will need to either update your browser to a recent version or update your Flash plugin.
By Jonathan Evans
22 January, 2018


Brazilian police claim the United States is the largest supplier of guns that end up in the hands of Brazil's armed criminals and drug dealers.

Brazilian Federal Police released a report on guns in December 2017. The Reuters news agency published a story on the findings earlier this month.

The report noted that Brazilian police have seized more than 10,000 weapons since 2014. It said most were seized in and around the city of Rio de Janeiro. 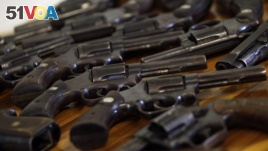 FILE - Shown is a collection of guns turned in during the first day of a national disarmament campaign in Rio de Janeiro, Brazil, May 6, 2011. (AP Photo/Silvia Izquierdo)

About 1,500 of the guns came from the United States. Reuters noted that the guns often traveled through another country before arriving in Brazil.

The news agency said that the U.S. weapons were mainly assault rifles and high-powered handguns. It noted that guns already in Brazil or arriving from other countries were often smaller handguns.

"The US continues to be the largest indirect source of illegal handguns and assault rifles as a result of unrestricted sales in stores and fairs in American cities," the report said.

Violence fueled by illegal guns has risen in Brazil since 2015. An economic recession from 2015 to 2017 led to spending cuts for many police forces around the country. The federal government sent troops to Rio de Janeiro and other areas last year to control violence related to the drug trade.

The report calls for international groups, such as the United Nations and the Mercosur trade group, to offer more support to stop illegal arms trafficking. Mercosur has four member countries: Brazil, Argentina, Paraguay and Uruguay.

The report named eight foreign stores. They are suspected of selling the most high-powered guns that ended up in Brazil. Five of the eight are in Florida, in the southeastern United States. The largest seller, however, was a store in Paraguay.

Brazilian citizens can legally own guns, but only if they meet a series of requirements. Even then, they can only buy small-powered weapons.

In the United States, laws governing gun purchases differ from one state to the next. But it can be a relatively simple process to buy a gun or get one that was legally sold to another person.

The Brazilian police report noted an instance in which 22 assault rifles arrived in Brazil in a shipment of furniture. Most of those guns ended up in Sao Paulo and Rio de Janeiro.

In another incident, 60 assault rifles from Miami, Florida were discovered inside swimming pool heaters in a shipment at a Rio airport.

The report noted that the entry of high-powered weapons into Brazil is linked to groups known to rob banks, bank ATMs and armored vehicles.

ATM – n. a machine that people use to get money from their banks by using a special card; short for automated teller machine

assault rifle – n. a gun that can shoot many bullets quickly and that is designed for use by the military

furniture – n. chairs, tables and other objects that help make a room ready for use

assemble – v. to put together

source – n. the cause of something; someone or something that provided what is needed