US Military Officials Worried: Are Young Americans Too Fat?

Update Required To play the media you will need to either update your browser to a recent version or update your Flash plugin.
By Susan Shand
25 July, 2019

"To young Americans across our country, now is your chance to join our military and make a truly great statement in life, and you should do it," Trump said in his speech at the Lincoln Memorial. 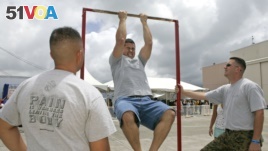 The next day, Trump spoke to reporters outside the White House. He said he believed his statement would increase the number of young people joining the military.

"Based on that, we're going to have a lot of people joining our military," he said.

However, a 2016 Department of Defense report found that nearly 75 percent of young Americans are unable to serve in the military, mostly because they weigh too much. Military recruitment is decreasing.

The Department of Defense says the Navy, Marines and Air Force met their recruiting goals in 2018; but the Army did not. The Army fell more than 6,500 recruits short of its target of 76,500.

In 2018, the group Mission: Readiness said in a report that 71 percent of Americans between the ages of 17 and 24 cannot meet all the basic requirements for military service. Mission: Readiness is a group of 750 retired military members that makes policy recommendations to the government.

The biggest problem is obesity. About 31 percent of young American would be rejected because they are overweight. Other problems are lack of education, criminal history and drug use.

As the number of people serving in the military decreases, the problem is likely to get worse.

That's because there are fewer members of the military "to encourage a young person to consider military service," said Youngman. The U.S. Army Recruiting Command reports that 79 percent of recruits have a relative who also served in the military.

Youngman said, lowering education or criminal history rules in order to enlarge the recruiting numbers is not a good choice. Rules are rules, he added.

"We've just got to work harder to find young people who can meet them."

However, the numbers are not encouraging.

The problem is very serious in southern states, like Georgia and Alabama. These states provide a large number of military recruits, but also have some of the highest levels of obesity in the country.

recruit – v. to find the right person to join the military or any organization

eligible – adj. able to be chosen or considered for something

encourage – v. to make someone more likely to do something