US Running Out of Pilots


Regional airlines in the United States are short of pilots.

Many older airline pilots are retiring. Federal regulations require pilots to take time off between flights to rest. Pilots are staying at their jobs overseas and in the military.

Republic Airways, a regional airline, filed for bankruptcy last week. Low profit and the pilot shortage were factors in the bankruptcy, according to the Associated Press. 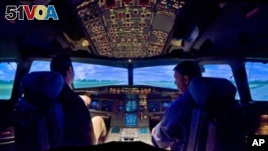 A U.S. Airways Airbus A320 simulator is shown at the airline's Charlotte training center in Charlotte, N.C., on Feb. 22, 2009. Based at the airport, the training center each year hosts about 20,000 US Airways employees, including a majority of the airline's pilots and flight attendants. Jeff Skiles, the first officer on Flight 1549, completed training on the Airbus A320 about a month before his plane was struck by birds, causing an engine failure that led to the water landing by Capt. Chesley "Sully" Sullenberger. (AP Photo/The Charlotte Observer, Gary O'brien)

Also, America's largest airlines are hiring pilots from regional airlines. There are too few pilots to fill the vacancies. Some openings are being filled through flight schools. But flight school attendance is down. That means trained pilots are difficult to locate.

Salaries for new pilots are low. The starting salary for first officers in the regional airline industry is $22,400, according to The Los Angeles Times. That salary is keeping pilots in the military and working for foreign competitors.

Captain Lee Moak is past president of Air Line Pilots Association International. He told The Los Angeles Times that "there is a shortage of pay and benefits for pilots in the regional airlines industry, not a shortage of pilots."

A lack of active pilots could hurt the future United States economy. In the next 20 years, the supply of pilots to fly passengers will meet just two-thirds of the demand, according to Forbes magazine.

A lack of pilots at regional airlines will mean less business and lower revenue. Fares will be higher, while routes will be fewer.

Jim Dresbach adapted this story for Learning English and VOANews.com. Kathleen Struck was the editor.

Do you think a pilot shortage will change how you travel? We want to hear from you. Write to us in the Comments Section or visit our 51VOA.COM.

airline – n. a company that owns and operates many passenger airplanes

bankruptcy – n. a condition of financial failure caused by not having the money that you need to pay your debts

vacancies – n. jobs or positions that are available

fare – n. the money a person pays to travel on an airplane, train or other vehicle

salary - n. the amount of money an employee is paid each year