US Restarts Restrictions on Iran

Update Required To play the media you will need to either update your browser to a recent version or update your Flash plugin.
By Mario Ritter
07 August, 2018


The United States is taking action to pressure Iran over its nuclear program and activities across the Middle East.

International restrictions against Iran were lifted as a result of a deal negotiated with world powers in 2015. Under that agreement, Iran promised to limit its nuclear activities for 15 years. In return, other countries offered to lift strong international sanctions, including financial restrictions.

President Trump has strongly criticized the agreement, known as the Joint Comprehensive Plan of Action. Shortly after the latest sanctions took effect, he wrote on Twitter, "I am asking for WORLD PEACE, nothing less!"

U.S. national security advisor John Bolton said on Tuesday that the reason for the sanctions was not to cause "regime change."

Bolton said the goal was to get the Iranian government to negotiate a new deal that limits its nuclear activities and missile program. He also said that Iran must step back from its support for international terrorism.

The new sanctions target Iran's automobile industry, the trade in gold and other valuable metals, and Iranian money.

On November 5, the U.S. government will re-establish sanctions against Iran's energy-related businesses. In addition, the U.S. plans to restrict financial transactions involving the Central Bank of Iran.

The new sanctions increase pressure on Iran, which is dealing with economic problems, including inflation and unemployment. 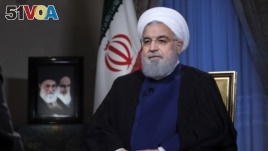 In this photo released by official website of the office of the Iranian Presidency, President Hassan Rouhani addresses the nation in a televised speech in Tehran, Iran, Monday Aug. 6, 2018.

Iran has condemned the move, saying U.S. officials are reneging on an international agreement. Iranian leaders have blamed the U.S. for the country's economic unrest.

Iranian President Hassan Rouhani said in a speech that the U.S. cannot be trusted because it withdrew from the nuclear deal. He noted that other countries that signed the agreement still support it.

Rouhani also rejected recent calls by Trump for direct talks between the U.S. and Iran. He said the offer was only meant to cause problems in Iran.

Israeli Prime Minister Benjamin Netanyahu has long opposed the 2015 agreement and welcomed the new sanctions. He said, "This is an important moment for Israel, the U.S., the region and the entire world."

Some Trump administration officials note that critics of the U.S. action say the sanctions will not be effective. The officials, however, said that already is not the case.

One official said that nearly 100 international businesses have announced plans to leave the Iranian market.

However, some U.S. allies in Europe have voiced strong concerns.

The European Union still supports the nuclear agreement with Iran. The EU said it is putting in place a "blocking statute." It is meant to stop European companies from obeying sanctions unless they have permission to do so. The move also is supposed to block the effect of any U.S. court action in Europe related to the sanctions.

EU foreign affairs chief Federica Mogherini opposed the U.S. move. So have the foreign ministers of France, Germany and Britain. They released a joint statement in which they said they "deeply regret" the move. The ministers called the Iran deal very important to nuclear arms control efforts around the world and to security everywhere.

In a statement on Monday, Trump noted that the U.S. "is fully committed to enforcing all of our sanctions..." He also warned that, "Individuals or entities that fail to wind down activities with Iran risk severe consequences."

Russia and China also signed the 2015 agreement. Both continue to support it. The United Nations' International Atomic Energy Agency has noted in 11 reports that Iran has honored the nuclear agreement.

Trump and other critics of the deal have said it gave Iran billions of dollars, which the government then used to fuel conflicts in Syria and other parts of the Middle East. They also say the deal does little if anything to slow Iran's nuclear program.

Mario Ritter adapted this story for VOA Learning English. His report is based on information from the Associated Press and VOA News.com. George Grow was the editor.

sanction – n. measure put in place to cause a country to obey international law, usually by limiting or banning trade

renege – v. to refuse to do something you promised or agreed to do

statute – n. a written law that is formally created by a government

consequences – n. something that happens as a result of actions or a set of conditions