US-Russia Tensions, Not in Space

Update Required To play the media you will need to either update your browser to a recent version or update your Flash plugin.
By Mario Ritter
21 March, 2018


Two American astronauts and a Russian cosmonaut are on their way to the International Space Station (ISS).

The three were launched from the Baikonur space port in Kazakhstan on Wednesday.

The launch comes at a time of increased tensions between Russia and the United States. Yet experts note that the two sides continue working together in space.

Amy Shira Teitel is a space flight historian. She notes that NASA, the U.S. space agency, depends on Russia to reach the space station.

"Currently, Russia's our only way up to orbit for the International Space Station and for any other human mission."

Cathleen Lewis is with the Smithsonian Institution's National Air and Space Museum in Washington. She works as a curator in the museum's Space History Department.

Lewis says, since 2011, NASA has worked to develop its next generation of spacecraft. That means the space agency is depending on Russian cooperation.

"The Russians are partners in the International Space Station. Therefore, they were deemed reliable to be able to supply services to the space station. They have the Soyuz, which has been operational for 50 years now."

Competitors cooperate even during Cold War

Cooperation in space between the two sides started in the 1970s during the Cold War. It was a period of intense competition between western countries and the Soviet Union. 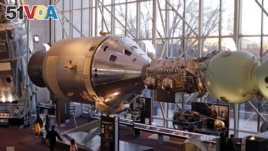 A display at the Smithsonian Air and Space Museum depicts the docking of an American Apollo command and service module, left, with a Soviet Soyuz capsule, Sunday, Dec. 7, 2014 in Washington, D.C. The July 1975 docking was part of a 1972 agreement between

But in 1975, an Apollo spacecraft linked up with a Soviet Soyuz spacecraft in Earth orbit. Cosmonauts and astronauts shook hands in space.

"That created a bond, but also the knowledge that we could do this, even in the height of the Cold War, and probably one of the worse periods of the Cold War. That both sides could get together and do this, unperturbed by the politics going on around them."

The "space race" between the United States and Russia ended in 1969 when NASA's Apollo 11 brought two men to the moon.

However, space travel is dangerous and both the American and Soviet space programs suffered losses in their efforts to outdo each other in space.

The Apollo-Soyuz mission served to show that the two sides could work together in cooperation towards safety.

Currently, the U.S., Russia and 13 other countries cooperate to operate and supply the space station.

Future space missions will need even more cooperation because of the costs involved. Lewis said this model is likely to be important.

"It is going to take a lot of money, a lot of resources to ship there to make either the Moon or Mars habitable for humans. This will likely be the model in which humans explore our celestial neighbors in the solar system."

Currently, cooperation remains the only way to get American astronauts to the ISS.

American companies SpaceX and Boeing, however, are expected to have spacecraft able to safely carry humans in coming years.

Steve Baragona reported this story for VOANews. Mario Ritter adapted the report for Learning English. George Grow was the editor.

rely – v. to need for support, to depend on

curator – n. someone who cares for something, especially a person responsible for a show or exhibit

deem – v. to consider someone or something in a certain way

bond – n. something that connects

unperturbed – adj. not bothered, not worried

resource – n. a supply of something; a place or thing that provides something useful

habitable – adj. fit to be lived in, able to support life

celestial – adj. related to the sky, in the sky