Update Required To play the media you will need to either update your browser to a recent version or update your Flash plugin.
By Bryan Lynn
24 February 2021


American scientists recently announced the first cloning of an endangered animal native to the United States. A black-footed ferret was created from the cells of an animal that died over 30 years ago.

Officials from the U.S. Fish and Wildlife Service said the ferret, named Elizabeth Ann, was born December 10. She is a genetic reproduction of a black-footed ferret named Willa who died in 1988. Willa's remains were frozen in the early days of genetic technology.

Such use of cloning aims to one day bring back animal species that have died out. The black-footed ferret project is part of a wider effort to build up the population of the endangered animal.

Noreen Walsh is the director of the National Black-footed Ferret Conservation Center in Northern Colorado. The center is part of the Fish and Wildlife Service. In announcing the successful cloning, she said in a statement "it provides a promising tool for continued efforts to conserve the black-footed ferret."

Black-footed ferrets are easily recognized by the dark markings on their feet and around the eyes. They hunt and feed on prairie dogs. 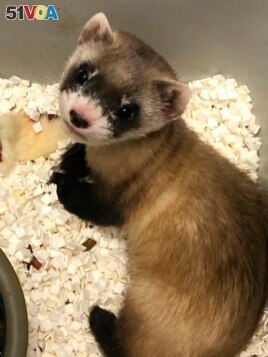 Even before the cloning, the animals were a conservation success story. They were thought to have died out because of the loss of prairie dog populations they depend on. The prairie dogs were shot and poisoned by animal farmers seeking to create a better land environment for raising cows.

But in 1981, a black-footed ferret was discovered in the state of Wyoming. Scientists then gathered the remaining population for a captive mating program. Thousands of ferrets have been released in the western U.S., Canada and Mexico since the 1990s.

But a lack of genetic diversity presents an ongoing risk to the population. All ferrets brought back so far came from just seven closely related animals. This genetic similarity puts the ferrets at risk for developing serious health problems.

When Willa died, the Wyoming Game and Fish Department sent her tissues to a "frozen zoo" operated by San Diego Zoo Global. The zoo keeps cells from more than 1,100 species and subspecies worldwide.

In the future, scientists hope to make changes to those genes to help cloned animals survive.

"With these cloning (methods), you can basically freeze time and regenerate those cells," said Pete Gober. He leads the black-footed ferret recovery effort for the Fish and Wildlife Service. He added that while reaching that level of genetic engineering might take a long time, he is hopeful it will be possible.

The Associated Press reported this story. Bryan Lynn adapted the report for Learning English, with additional information from the U.S. Fish and Wildlife Service. Caty Weaver was the editor.

clone – v. to make an exact copy of a person, animal or plant