Update Required To play the media you will need to either update your browser to a recent version or update your Flash plugin.
By Bryan Lynn
02 July 2020


A new study shows the American honeybee population is slowly recovering after suffering major losses the year before.

Beekeepers in the United States lost only 22.2 percent of their honeybee colonies during the past winter, from October 1, 2019 to March 31 of this year. That is lower than the average winter loss of 28.6 percent. 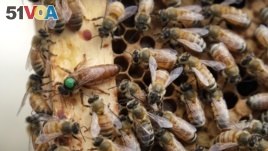 In this Aug. 7, 2019, file photo, the queen bee (marked in green) and worker bees move around a hive at the Veterans Affairs in Manchester, N.H. (AP Photo/Elise Amendola, File)

Those numbers come from a group called the Bee Informed Partnership. It organized a recent survey of thousands of U.S. beekeepers.

The survey found that last winter was the second smallest winter loss in 14 years of studies. The loss last winter was less than the winter of 2018-2019, when a record 37.7 percent of colonies died off, researchers found.

After that winter, the losses continued through the summer of 2019, when beekeepers reported a loss rate of 32 percent. Yet that rate was higher than the average of 21.6 percent for summer losses.

Nathalie Steinhauer is with the Bee Informed Partnership. She told The Associated Press that although the summer losses were higher, the winter deaths are "really the test of colony health." Steinhauer believes the findings are good news for the insects. "It turned out to be a very good year," she said.

The survey involved a total of 3,377 beekeepers nationwide. Some operate businesses for profit, while others just keep bees at home as a hobby.

Jerry Bromenshenk is a bee expert from the University of Montana. He was not part of the survey. He told the AP he hopes a lower winter loss will bring better results in 2020. Bromenshenk said that he thinks that can happen if the weather cooperates and beekeepers exercise good colony management.

U.S. beekeepers might also move more of their colonies to weather-resistant areas during the winter to improve the chances of survival, said Keith Delaplane, who studies insects. He is with the University of Georgia.

New U.S. Department of Agriculture research suggests putting bees in "cold storage" to help them get through the winter.

Scientists have long watched the population of animal pollinators – which are critical to the world's food supply - shrink.

Honeybees are among the easiest pollinators to follow. But experts say they are threatened by diseases, mites, chemical products, and loss of food.

Steinhauer said she and other scientists are seeing the current loss rates as "part of the new normal."

The Associated Press reported on this story. Bryan Lynn adapted the report for VOA Learning English. George Grow was the editor.

honeybee – n. a kind of bee that lives with others in a hive and makes honey

hobby – n. an activity someone does for pleasure when they are not working

management – n. the control and organization of something

pollinate – v. to take pollen from one plant or part of a plant to another so new plant seeds can be produced

mite – n. a very small animal similar to a spider