US, South Korea Seem to Scale Back War Games

Update Required To play the media you will need to either update your browser to a recent version or update your Flash plugin.
By Jonathan Evans
21 August, 2017


The United States and South Korea have begun 10 days of joint military exercises on Monday. But the exercises will have fewer troops, vehicles and other equipment than last year.

Military leaders say these exercises, also known as war games, are needed to maintain operational readiness. But there are concerns that a show of force could again increase tensions in the region.

The yearly US-South Korea war games are large military planning and coordination exercises. They are designed to respond to computer-simulated North Korean attacks. About 17,500 American troops will participate in this year's exercises, along with 50,000 South Koreans. That is down from 25,000 American troops in 2016.

Military leaders say these annual war games are needed to train new soldiers in the region.

Grant Newsham is with the Japan Forum for Strategic Studies in Tokyo. He said, "What we are talking about here is warfare. It's not practicing for a parade, so you have to constantly be updated."

The move came after U.S. President Donald Trump warned that the U.S. military was "locked and loaded" and would respond to any attack with "fire and fury." 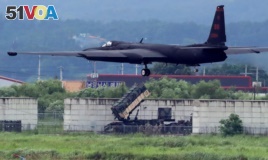 Some political experts suggest the United States seems to have responded to North Korea's restraint by reducing the size of this year's exercises.

On Sunday, Defense Secretary Jim Mattis denied that North Korea's objections were the reason for the reduced number of troops in this year's war games.

"This is an exercise for the defense of Korea. It's a combined exercise and it's all worked out way in advance by the alliance."

On Monday, South Korean President Moon Jae-in said the joint exercises are defensive in nature. He added that they are not intended to increase tensions on the Korean peninsula. He warned North Korea to, in his words, "not exaggerate our efforts to keep peace."

China and Russia have also called for the suspension of the joint military exercises. The countries also want North Korea to suspend its missile and nuclear tests.

Brian Padden wrote this story for VOANews. Jonathan Evans adapted it for Learning English. Hai Do was the editor.

in advance – phrase - before a future event or time; before something happens