US Tariffs Raise Fears of Trade War with American Allies

Update Required To play the media you will need to either update your browser to a recent version or update your Flash plugin.
By Hai Do
31 May, 2018


The United States says it will require tariffs on steel and aluminum imports from Europe, Mexico and Canada.

U.S. officials announced the tariffs are a result of their failure to win trade concessions. Officials said the import taxes would take effect on Friday.

The announcement led to promises of action from major American allies, rising trade tensions and a drop in stock prices.

President Donald Trump had announced the tariffs in March. Trump said they were needed to protect the United States from unfair competition. But he delayed the measure to give time for negotiations. 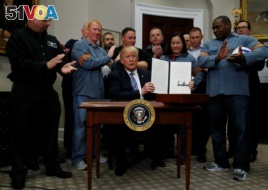 FILE - U.S. President Donald Trump is after signing a proclamation to establish tariffs on imports of steel and aluminum at the White House in Washington, U.S., March 8, 2018. REUTERS/Leah Millis

The tariffs will be 25 percent on imported steel and 10 percent on aluminum.

Europe and Mexico reacted to the U.S. move with their own lists of tariffs on American products, raising fears of a trade war among allies.

Jean-Claude Juncker, the president of the European Commission, called the U.S. decision "protectionism, pure and simple."

Mexico said it would tax a number of U.S. imports, including pork bellies, apples, grapes, cheeses and flat steel.

Trudeau said Canada supplied "aluminum and steel to the U.S. defense industry, putting aluminum in American planes and steel in American tanks." He promised to add Canadian tariffs on a number of American goods.

Brazil, Argentina and Australia have agreed to limit steel shipments to the U.S. to avoid tariffs. But import taxes remain on steel and aluminum imports from Japan.

U.S. Secretary of Commerce Wilbur Ross spoke to reporters on Thursday. He said that talks with Canada and Mexico over amending the North American Free Trade Agreement were "taking longer than we had hoped."

Speaking from a meeting in Paris, Ross noted that talks with Europe had "made some progress," but not enough for the U.S. He said, "We continue to be quite willing and indeed eager to have further discussions."

German Chancellor Angela Merkel expressed opposition to the rising trade tensions before the U.S. announcement. She said the tariffs were in violation of the rules of the World Trade Organization (WTO).

After the U.S. action, the European Union announced plans to bring its case against the U.S. tariffs to the WTO on Friday.

French Finance Minister Bruno Le Maire criticized the tariffs. He said they "will only lead to the victory of those who want less growth, those who don't think we can develop our economies across the world."

Even some of Trump's supporters criticized the measures.

U.S. Senator Orrin Hatch said, "Tariffs on steel and aluminum imports are a tax hike on Americans." He added that it would hurt both workers and businesses. Like Trump, Hatch is a member of the Republican Party.

The groups Freedom Partners Chamber of Commerce and Americans for Prosperity said the tariffs would hurt the nation's economy and low unemployment rates.

The Associated Press reported this story. Hai Do adapted the AP reports for VOA Learning English. George Grow was the editor.

tariff - n. a tax on goods coming into or leaving a country

concession - n. something that you give up to reach an agreement

whiskey - n. a strong alcoholic drink made from grain

motorcycle - n. a vehicle with two wheels powered by a motor

pork bellies - n. are the cut of pork that comes from the belly of a pig