Update Required To play the media you will need to either update your browser to a recent version or update your Flash plugin.
By Hai Do
14 July 2020

The surprise announcement came during a federal court hearing on Tuesday in Boston, Massachusetts. Both Harvard University and the Massachusetts Institute of Technology (MIT) had filed the legal action seeking to overturn the rule.

Judge Allison Burroughs said federal immigration officials had agreed to cancel the planned restrictions, which were announced July 6, and "return to the status quo." 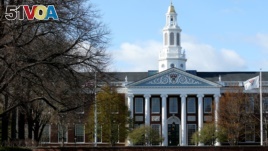 A lawyer representing the U.S. government confirmed that the judge's announcement was correct.

The decision means that international students are again permitted to attend classes online and keep their visas during the health emergency "exemption." Immigration and Customs Enforcement (ICE) had established the exemption on March 13, when the coronavirus was spreading across the country.

But on July 6, the agency said international students must take at least some of their college classes in person during the upcoming autumn term. If they could not, they must transfer to another school offering in-person classes or leave the country. The agency added that students would have to leave the country even if a health emergency forces their classes online after the school year begins.

The restriction came on the same day that Harvard and several other colleges said they would hold all of their classes online in the fall.

On July 8, Harvard and MIT filed legal action against the new restriction. Harvard University President Lawrence Bacow said at the time that the restriction "comes at a time when the United States has been setting daily records for the number of new infections."

More than 200 colleges and at least 17 states have supported the action. Some colleges also filed their own legal action against the rule.

About 5,000 international students at Harvard and nearly 4,000 attending MIT could have lost their visas under the restriction.

Across the United States, nearly 400,000 international students received the F-1 or M-1 visa in the 12-month period ending in September 2019.

"I feel relief," said Andrea Calderon, a biology student from Ecuador. The City College of New York student told the Associated Press, "It would have been a very big problem if I had to leave the country right now."

Hai Do wrote this story for Learning English with additional information from the Associated Press. Ashley Thompson was the editor.

exemption - n. freedom from being required to do something

transfer - v. to move from one school to another

fall - n. the season between summer and winter