Update Required To play the media you will need to either update your browser to a recent version or update your Flash plugin.
By Mario Ritter Jr.
08 September 2020 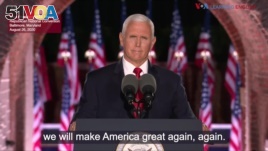 Vice President Mike Pence was not known in many parts of the United States four years ago when Donald Trump named him as his choice for vice president.

At the time, Pence was the governor of Indiana. Before that, he had served six terms in the U.S. House of Representatives.

Over 16 years in elected office, Pence built a solid record of supporting conservative policies and legislation. He also developed close ties to evangelical Christians, an influential group of conservative voters. Some political observers believe they might make up one fourth of the U.S. electorate.

In his 2016 election victory, Trump won a large percentage of the evangelical vote. Part of the reason was the Republican Party's nomination of Mike Pence as vice president.

From his earliest days as a politician, Pence has described himself as "a Christian, a conservative and a Republican, in that order."

As vice president, Pence is known for his loyalty to Trump. However, during the 2016 campaign, he did criticize him. After the release of a video of Trump making insulting comments about women, Pence said, "I do not condone his remarks and cannot defend them."

The 61-year-old Pence has been married to his wife Karen, a schoolteacher, for 35 years. The two have three children.

Mike Pence grew up in Indiana. He earned a law degree and worked as a lawyer before turning to politics. He lost his first two campaigns for a seat in the House in 1988 and 1990. But Pence kept his voice and face before Indiana voters, working as a conservative radio and television talk show host from 1994 to 1999.

In 2000, he won the first of six two-year terms in Congress, where he established a conservative voting record and became an influential member of the Republican Party. During one term, he was chairman of the Republican Study Committee, a group of conservative lawmakers. But he lost a vote to become the Republican minority leader at a time the Democratic Party controlled the House.

During his 12 years in Congress, he proposed 90 bills and resolutions, but none of them became law.

Pence as governor of Indiana

Pence won the Indiana governorship in 2012 and continued his support of issues important to conservatives. He signed measures aimed at cutting taxes and restricting a woman's right to end her pregnancy.

He also signed a law blocking local governments in the state from requiring businesses to pay wages and aid to workers more than what is required by federal law.

In an issue that got national attention, Pence signed a measure called the Religious Freedom Restoration Act. The law gave individuals and companies permission to say that their religious rights would likely be hurt if they were required to treat all customers the same. Conservatives in the state and in other places used the measure to oppose the legalization of same-sex marriages.

But after protests from some Republicans and businesses that said they would refuse to move to the state or expand existing operations, Pence compromised. He amended the law to bar discrimination based on sexuality or gender identity.

Pence faced his biggest test as vice president when the coronavirus health crisis reached the United States in early 2020. Trump asked him to oversee the government's effort to limit the spread of the virus or "flatten the curve." Pence has been leading the administration's effort for testing and treatment while also supporting research to develop a vaccine.

Pence chaired meetings of the White House coronavirus task force. And for several weeks, he spoke about the fight against the coronavirus at nationally televised press conferences. During these meetings, he answered questions from reporters.

Pence has been criticized for reporting progress against the virus in the U.S. as tens of thousands of Americans died from COVID-19 and tens of millions of workers lost their jobs. In private meetings, Pence urged Republican senators to note "encouraging signs" in the country's battle against the virus.

In June, Pence wrote an opinion piece in The Wall Street Journal. In it, he argued that there was too much panic over the coronavirus. He praised Trump and said the U.S. "public health system is far stronger than it was four months ago, and we are winning the fight against the invisible enemy." He also blamed some in the news media for creating fear over the spread of the virus.

The increase in coronavirus cases has slowed nationwide, but not stopped. The Johns Hopkins University Center for Systems Science and Engineering has been following the spread of the virus. It reports that the U.S. has over 6 million confirmed cases, with more than 183,000 deaths reported.

electorate – n. the people who can vote in an election

condone – v. to forgive or approve of something

degree –n. an official document that is given to someone who has successfully completed studies at a university or college

host – n. a person who talks on a radio or television program

customers – n. someone who buys goods or services from a business