Video Shows Man Believed to be Last of Amazon Tribe

Update Required To play the media you will need to either update your browser to a recent version or update your Flash plugin.
By Jonathan Evans
27 July, 2018


Brazil's Indian Foundation has released a video that shows images of a man believed to be the last surviving member of his tribe. No one knows the man's name or that of his tribe. It appears he has lived alone in Brazil's Amazon for 22 years.

The video is from 2011. But officials say they last saw evidence he was alive in May.

The man is cutting down a tree in the shaky video shot from a distance through trees and other leafy plants. The recording includes sound of his ax hitting the tree and bird calls. 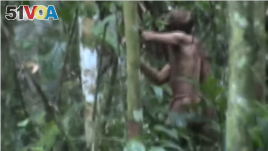 Altair Algayer leads the team of investigators that observed the man. He said the foundation was unwilling to release the video earlier because it could not ask for the man's permission. But he also noted that such images help to bring attention to people who struggle to keep their distance from the outside world.

Algayer spoke to the AP by phone. He said, "Lots of people are seeking out (this video). They want to know what is he like, how can he be seen, is he still alive. I think that ends up helping to protect the territory."

Brazil is home to several native groups that are not in contact with other peoples. Their land is increasingly under threat, as is the land of natives in contact with the outside world. Many outside groups fight over the Amazon's resources. Last year, 71 people were killed in conflicts over land. Brazil's Pastoral Land Commission keeps records on the violence. It says 2017 was the most violent year since 2003.

The Indian Foundation began its observation of the man in 1996. It found him living alone in the forest in Rondonia state. The foundation believes farmers and loggers repeatedly attacked his tribe beginning in the 1980s. It suspects the last members were killed in an attack in 1995 or 1996. But the foundation said in recent years, no one has tried to enter the protected area where he lives.

Algayer said the team that tracks him calls him "the Indian of the hole" because of an unusual hole that he dug.

He added that the man appears to be in good health and between 55 and 60 years old.

The foundation's policy is to let such people live their lives separate from the rest of civilization. But members worried he was in danger because he was alone. They made contact in 2005. The group says he made clear at that time that he wanted no contact. So, it made no further attempts.

A team enters his territory to look for signs that he is still alive about every other month. The last time they saw him was in 2016. But they are able to tell he is still alive by evidence he leaves behind. The team found fresh footprints and a newly cut tree in May.

They have left tools and seeds for the man. They have seen that he has planted corn, potatoes, papayas and bananas.

In a statement, Algayer said, "This man, who is unknown to us, even after losing everything...proved that, even like that, alone in the forest, it is possible to survive and resist joining mainstream society."

ax – n. a tool that has a heavy metal blade and a long handle and that is used for chopping wood

mainstream – adj. related to the thoughts, beliefs, and choices that are accepted by the largest number of people

society – n. the people of a particular country, area, time, etc., thought of especially as an organized community