Update Required To play the media you will need to either update your browser to a recent version or update your Flash plugin.
By John Russell
11 August 2020


Pygmy hogs — the world's smallest and rarest wild pig — are under a virus lockdown, but it has nothing to do with the coronavirus.

Officials in India are restricting the movement of pygmy hogs because of the country's first outbreak of African swine fever. 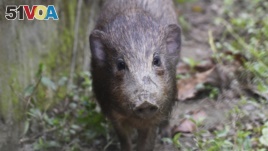 There are nearly 300 pygmy hogs living in the northeastern state of Assam. But scientists fear the virus could destroy these rare animals.

Adult pygmy hogs are very small. They grow to a height of about 25 centimeters. Pygmy hogs were thought to have died out in the 1960s. But over the past 20 to 30 years, a captive breeding program and other protective efforts have increased their numbers.

There is no vaccine or cure for the disease that has already killed over 16,000 domestic pigs, said Pradip Gogoi, an Assam state official. Domestic animals are bred and trained to accept the care of human beings.

Officials confirmed that African swine fever reached India on May 18. Scientists restricted entry to the pygmy hog breeding centers and took other steps, said Parag Deka. He heads the Pygmy Hog Conservation Program. The program is a project led by Indian officials, the Britain-based Durrell Wildlife Conservation Trust and a local not-for-profit group.

Deka told The Associated Press that the virus could possibly destroy the whole pygmy hog population. The virus spreads mainly by direct contact between pigs. It can also spread through infected meat or other materials.

Linda Dixon has been studying the virus at The Pirbright Institute in Britain. She explained that a vaccine for the swine fever is probably two or three years away. The virus kills almost all infected pigs, both wild and domestic, she added.

Scientists have set up two security fences at each of Assam state's breeding centers. No visitors are permitted, and cars cannot be left at the centers.

Workers who live outside the centers must leave their shoes at the entrance when they arrive. They must wash and clean themselves, and then put their feet in a special kind of cleaning solution. Then they can put on clean shoes to go inside.

"This is the new normal," Deka said.

Pygmy hogs are among the few mammals — and the only pig — that build large nests out of dried grass. They live in these nests in families of four or five.

The virus threat also means a change of diet for the rare pigs. While these animals still eat fruits and grains, they cannot eat vegetables that grow underground. This is because the virus survives longer in soil.

Keeping the pygmy hogs and the breeding centers secure is especially important now, Deka said. He noted that officials say that the virus has already begun spreading in wild boars in the area, making the disease more difficult to stop.

Deka says that because of economic issues, money has become a problem. Some aid groups said they no longer have enough to give aid. The result is that it is difficult to find money for new security measures and employee training.

"I believe that when you make a change, it will be hard in the beginning, messy in the middle and good at the end," he said. "Right now, we are between the hard and messy stage."

Aniruddha Ghosal reported on this story for The Associated Press. John Russell adapted the story for VOA Learning English. George Grow was the editor.

domestic – adj. existing inside a country; relating to a home or family members

conservation – n. prevention of wasteful use; protection of wildlife or the natural environment

mammal – n. a warm-blooded animal that drinks milk produced by its mother

nest – n. a place chosen by an animal for sheltering its young