Watch Out for English and German ‘Falsche Freunde’

Update Required To play the media you will need to either update your browser to a recent version or update your Flash plugin.
By Bryan Lynn
07 August, 2018


In recent weeks, we have talked about how people learning a foreign language can be fooled by "false friends." These are words that look or sound alike in other languages, but have completely different meanings.

English itself is a Germanic language, and there are many English words that were borrowed from German. Two well-known examples are kindergarten and gesundheit - both of which are widely used in English.

In the United States, a kindergarten – which word for word means "child garden" in German – is a preparatory school for children. The German word gesundheit means health, and is often said after people sneeze. It means you are wishing them good health.

Some other German words would be immediately recognizable to English speakers. A few have the same meaning in both languages, but many do not. Here are a few of the most common false friends in English and German.

In English, the word labor means work. It is also used to describe workers as a group. In German, however, das labor is used in scientific and medical terminology; it means laboratory.

As we have already discovered, being tricked by false friends can lead to funny or unsettling situations. 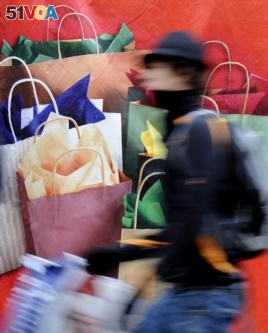 In this file photos, a man passes a banner with Christmas gifts in downtown Hamburg, Germany, on Saturday, Dec 20, 2008. (AP Photo/Fabian Bimmer)

One such example is the English word gift. Many people look forward to giving and receiving gifts while celebrating a holiday or birthday. But in German, the word gift has a much darker meaning. It means poison. So instead of showing up to a party with poison, German speakers would be pleased to know that you brought a geschenk -- the word for gift.

Do not be fooled by the English word bald, which is used to describe the head of someone with little or no hair. In German, the word bald means soon.

Cars, airplanes and other things can go fast. In English, the word fast can also describe when someone decides not to take in any food. But in German, fast means almost. The German word for doing something quickly is schnell.

The German word kurios is written almost like the English word curious. Someone is curious if they are interested in trying new things. But you would not want to make a mistake and call a person kurios, unless you find them strange.

The German word fabrik is nearly like the English word fabric, a material used to make clothes. But fabrik actually means factory, which could be used to produce clothing or anything else.

If you find yourself going to Germany, you might be surprised to see and hear the term gross in many places. An English meaning of gross is something unpleasant. There is also the English expression "gross me out." It is used to describe something so unpleasant it may even cause someone to feel physically sick.

In German, the word gross is an adjective, just like it is in English. But it means something large. So having a gross ice cream in Germany is not something to be avoided. It can actually be very satisfying.

And speaking of taste, there is also an exact German version of this word. But taste is the German word for button. So this is often seen in public places to let people know where to push -- not what to eat.

You could also be fooled by the German words rat, pest and bad. While each of these describe generally something undesirable in English, this is not necessarily the case in German.

In English, the word pest describes someone who makes you feel tired or something that can cause damage. But pest, in German, is the word for plague, a serious disease that spreads quickly and kills a lot of people.

Most English speakers would not want to come face to face with a rat, an animal considered a pest. However, the German word rat is a good thing. It means advice. 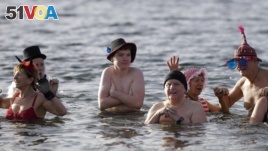 In German-speaking countries, it would not be unusual to see the word bad in a public place. But bad is nothing to be feared, it is the name for a place to swim.

While smoking is a common activity around the world, the German word smoking describes a nice dinner jacket.

The word mist looks the same in both languages. In English, mist describes small water droplets that can form in the air, sometimes making it difficult to see. A mist can also provide a cooling effect on a warm day. But mist has a completely different German meaning. It describes animal droppings, things that are considered nonsense or foolish.

Another false friend in German is gymnasium, which also exists in English. But while a gymnasium – or gym – is only used in the United States as a room for exercise, a gymnasium is a European secondary school.

You might think you know what kissen means in German. After all, it looks just like the English word kiss. But the word means pillow in Germany, where the term for kissing is küssen.

Another German word often mistaken is chef, which in English means the person responsible for meals at a restaurant. In German, it simply means the chief or leader of any kind of organization.

garden – n. a piece of land where flowers, fruits or vegetables are grown

sneeze – v. to blow out air from the nose and mouth due to irritation or sickness

pants – n. a piece of clothing that covers each leg separately

skirt – n. a piece of clothing that hangs from the waist down

button – n. a switch that is pressed to control a piece of equipment

rat – n. an animal that looks like a large mouse and has a long tail

bath – n. place where you wash your body

kiss – v. to touch with the lips as a sign of affection

pillow – n. a soft rest or support for the head