Update Required To play the media you will need to either update your browser to a recent version or update your Flash plugin.
By Bryan Lynn
27 May 2020


A historic launch to return American astronauts to space on a private spacecraft has been postponed because of weather.

The launch of SpaceX's Crew Dragon was called off Wednesday about 16 minutes before liftoff at NASA's Kennedy Space Center in Florida.

Flight controllers had reported that all equipment and technical requirements had been met to go forward with the launch. But several weather-related requirements affecting the flight path could not be met. One concern was the possibility of lightning.

NASA has set the next launch attempt for Saturday afternoon. 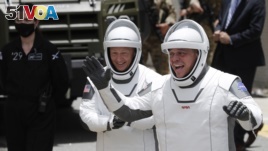 NASA astronauts Douglas Hurley, left, and Robert Behnken wave as they walk out of the Neil A. Armstrong Operations and Checkout Building on their way to Pad 39-A, at the Kennedy Space Center in Cape Canaveral, Fla., Wednesday, May 27, 2020.

U.S. astronauts Robert Behnken and Douglas Hurley are aiming to become the first astronauts to launch from American soil since the last space shuttle flight in 2011.

A successful SpaceX launch will make history as the first time a private company has launched astronauts into orbit.

A Falcon 9 rocket is to carry Crew Dragon. Space X designed and built both spacecraft.

The mission will take Behnken and Hurley to the International Space Station, where they are expected to stay at least a month.

Bryan Lynn wrote this story based on reports from The Associated Press, Reuters and NASA. Caty Weaver was the editor.