What Do We Know About The Delta Variant?

Update Required To play the media you will need to either update your browser to a recent version or update your Flash plugin.
By Dan Novak
25 June 2021


The delta variant is a version of the coronavirus that has been found in 80 countries since it was first discovered in India. It got its name from the World Health Organization, which names important variants after letters of the Greek alphabet.

Viruses always mutate, and most changes are not worrying. There is concern, however, that some variants might change enough to be more transmissible, make people sicker or avoid the protection of vaccines.

Experts say the delta variant spreads more easily because of mutations that make it better at connecting to cells in our bodies. In the United Kingdom, the variant is now responsible for 90 percent of all new infections. In the U.S., it represents 20 percent of infections, doubling in the past two weeks. Health officials say it could become the country's most common type as well.

Dr. Anthony Fauci is the top disease expert in the U.S.

"The delta variant is currently the greatest threat in the U.S. to our attempt to eliminate COVID-19," he said. 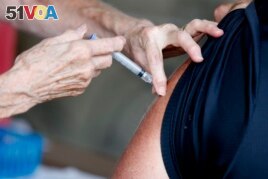 A man receives a COVID-19 vaccine at a clinic at Mother's Brewing Company in Springfield, Mo., on Tuesday, June 22, 2021.(Nathan Papes/The Springfield News-Leader via AP)

Dr. Jacob John studies viruses at the Christian Medical College at Vellore in India. He said there is not enough data to be sure whether the variant makes people sicker. And studies have shown that vaccines work against variants, including the delta variant.

Researchers in England studied how effective the two-dose AstraZeneca and Pfizer-BioNTech vaccines were against coronavirus variants. The vaccines protected those who got both doses, but were less effective for those who got just one dose.

The American state of Missouri is seeing a sharp rise in delta variant cases because many people are not getting vaccinated. Over 53 percent of Americans have received at least one shot, says the Centers for Disease Control and Prevention.

But many parts of Missouri are well below 40 percent. One county is at just 13 percent. Fauci said there is a "real danger" of big increases in cases in areas around the U.S with low vaccination rates.

That is why experts say it is important to be fully vaccinated. And it is why they say making vaccines available worldwide is so important.

But it is not clear yet how long vaccines provide protection against disease.

Mehul Suthar is with the Emory University Vaccine Center. He said the current vaccines are designed to work against one spike protein on the coronavirus. The spike protein is the part of the virus that attaches to human cells and is targeted by vaccines.

Suthar said if the virus mutates enough over time, vaccines might also need to change to improve their effectiveness.

Dan Novak adapted this story from reporting by The Associated Press. Susan Shand was the editor.

mutate — v. to cause (a gene) to change and create an unusual characteristic in a plant or animal : to cause mutation in (a gene)

transmissible — adj. able to be transmitted, or spread

eliminate— v. to remove (something that is not wanted or needed) : to get rid of (something)