What Has Happened to Columbus Day?

Update Required To play the media you will need to either update your browser to a recent version or update your Flash plugin.
By Mario Ritter Jr.
11 October 2020


This Monday is Columbus Day in the United States. The celebration of the holiday, observed on the second Monday of October, is now somewhat different from ones in the past.

The U.S. government established Columbus Day as a national holiday in 1934 to honor the explorer Christopher Columbus. The day recognizes Columbus's arrival in the Americas in October 1492. 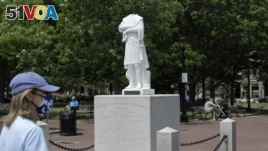 A passer-by walks near a damaged Christopher Columbus statue, Wednesday, June 10, 2020, in a waterfront park near the city's traditionally Italian North End neighborhood, in Boston.

In May, the death of George Floyd, a Black man, in Minneapolis, Minnesota incited nationwide protests against police use of force and racial injustice. Protestors directed their anger at statues and monuments honoring Confederate officials from the American Civil War. They associated them with racial injustice, racism and slavery.

The anger led to attacks on memorials to Columbus around the country. Statues of the explorer were taken down in Boston, Chicago and many cities. The city of Columbus, Ohio, also reportedly removed his statue and "placed it in safekeeping."

A history of Columbus Day

The explorer, who is believed to have been born in Genoa in modern-day Italy, arrived in the Americas more than 525 years ago. He claimed most of the territory for the kingdom of Spain, which supported his expeditions.

The first reported celebrations of Christopher Columbus's arrival in America took place in the United States in 1792. The celebration was meant to mark the 300th anniversary of Columbus' arrival.

Later, Italian-Americans began celebrating the explorer as part of their cultural history. The Catholic charitable group The Knights of Columbus has long defended the legacy of Columbus. The group was founded by Irish-Catholic immigrants to the U.S.

After years of growing support, President Franklin D. Roosevelt declared Columbus Day a national holiday in 1934. Since 1971, Columbus Day has been observed on the second Monday of October.

Critics say that Columbus did not "discover" America since native people already lived there. His explorations helped open the way for a huge migration of Europeans to what they called The New World. This, they say, brought war, disease and death to many native peoples.

In Oklahoma, Governor Kevin Stitt signed a law last year meant to satisfy both sides in the historical argument. The state recognizes both Columbus Day and Indigenous People's Day at the same time.

In 2020, many observances of Columbus Day are being cancelled because of restrictions meant to limit the spread of the new coronavirus.

Columbus Day remains a holiday for the federal government in all U.S. states and territories.

Mario Ritter Jr. wrote this for VOA Learning English. Hai Do was the editor.

knock –v. to his something in a forceful way

charitable –adj. done to help people who are poor, sick or in need

legacy –n. something that happened in the past or is received from someone in the past