What Is Space Junk and How Dangerous Is it?

Update Required To play the media you will need to either update your browser to a recent version or update your Flash plugin.
By Bryan Lynn
20 November 2021


American and European officials sharply criticized Russia's recent missile test that exploded an orbiting satellite into many pieces. Scientists said this orbiting debris will increase risks to humans and their efforts in space for years to come.

But, what is this debris – also called space junk -- and what are the safety threats it presents? 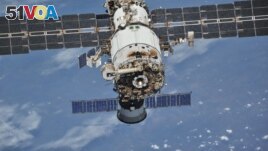 Space debris is anything humans have placed in space but no longer use. The junk floats around hundreds of kilometers above Earth. Experts say the main worry is that such debris will hit a space station, satellite or other equipment.

Space debris orbits around the Earth very fast - about 25,000 kilometers per hour in low-Earth orbit. The junk could cause major damage if it hits satellites or spacecraft.

"Every satellite that goes into orbit has the potential of becoming space debris," said Professor Hugh Lewis, with Britain's University of Southampton. Lewis, who heads the university's Astronautics Research Group, spoke to Reuters news agency.

With the number of satellite deployments rising, near-Earth space will likely see more space debris in the coming years. Russia is not the only country to have destroyed a satellite. China, the United States and India have also carried out anti-satellite missile tests.

How big is the debris?

Holger Krag is head of the European Space Agency's Space Safety Program Office. He told Reuters that if the build-up of debris continues, some areas of space might become unusable.

What was the effect of the latest test?

The satellite Russia just destroyed had been launched in 1982. It weighed more than 2,000 kilograms. American officials said the test created more than 1,500 pieces of "trackable orbital debris." The U.S. Space Command said the missile strike likely created hundreds of thousands of additional smaller pieces of debris.

Crew members aboard the International Space Station (ISS) were directed to take shelter in their attached spaceship capsules for two hours after the test. The safety measure was taken in case the crew had to leave because of possible damage from debris.

Can space debris be removed?

The American space agency NASA says debris in orbits 600 kilometers or less from Earth will fall back to the planet within several years. But space junk above 1,000 kilometers is expected to continue circling for a century or more.

"If we want to try and solve the space debris problem, we have to start to remove that type of object," said professor Lewis of the University of Southampton. Japan's Aerospace Exploration Agency (JAXA) and the European Space Agency (ESA) have partnered with private companies to find ways to remove space debris.

In addition to being a threat to space property and astronauts, debris also increases the cost for satellite operators. Industry experts have estimated that protection and reduction efforts dealing with space junk make up about 5-10 percent of satellite mission costs. One study by the Organization for Economic Co-operation and Development (OECD) found that the costs for lower-Earth orbits were even higher.

junk – n. material that is no longer working or useful

potential – n. having or showing the capacity to become or develop into something in the future

type – n. a kind of something