Update Required To play the media you will need to either update your browser to a recent version or update your Flash plugin.
By Bryan Lynn
01 April 2020


The World Health Organization is partnering with major video game makers in support of online gaming as a way to keep people indoors to help fight the new coronavirus.

The partnership comes as online video game play has increased as governments across the world ordered citizens to stay home in an effort to stop the virus from spreading.

In mid-March, Italy's top telecommunications company announced internet traffic had increased more than 70 percent in the days since the government enforced quarantine rules, Bloomberg reported. Telecom Italia said a big reason for the rise was an increase in play for video games like Fortnite and Call of Duty. 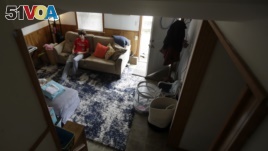 In this Thursday, March 19, 2020, photo, Jack Keenan, 16, plays video games at his home in San Francisco. California's Bay Area has been shut down for more than a week, the first region of America to order its residents to stay home and work remotely.

In the United States, internet service provider Verizon reported a 75-percent jump in gaming activity on its networks during the second week in March, when stay-at-home directives began to take effect.

Eighteen video game industry leaders teamed up with the WHO to create a program called #PlayApartTogether.

The companies say they will share messages about the virus with gamers and urge them to follow the WHO's safety advice. The messages will include suggestions on things such as physical distancing and cleanliness. They will also advise on ways to behave around others to avoid spreading or catching the virus.

Many large U.S. gaming events and contests have been canceled because of the coronavirus spread. The companies promised to create "special events, exclusives, activities and rewards" for players online in the coming weeks.

One of the companies taking part is Activision Blizzard, Inc. It is one of the world's largest video game developers. The company has produced many popular games including Call of Duty, World of Warcraft, Diablo and Candy Crush.

The head of Activision Blizzard, Bobby Kotick, said in a statement that the coronavirus crisis has created a major need for people to find ways to stay safely connected to each other. "Games are the perfect platform because they connect people through the lens of joy, purpose and meaning," Kotick said.

Ray Chambers is the WHO's Ambassador for Global Strategy. In a tweet, he wrote that the video game industry's worldwide reach can get the message out. "More physical distancing + other measures will help to flatten the curve + save lives," Chambers wrote.

The WHO's cooperation with the gaming industry comes after the organization decided last year to officially declare "gaming disorder" a behavioral addiction on its list of diseases.

The new partnership got some criticism online. One gamer wrote to Ray Chambers on Twitter: "Oh thats ironic. Last I remembered you guys classified us gamers as addicts, now you praise us because we already know social distancing?"

Paula Zirinsky, chief marketing officer for the intelligence-gathering company K2 Intelligence, also reacted on Twitter. "You can't have it both ways. Gaming can be addictive. WHO said it themselves last year," she tweeted. "With kids returning to virtual classrooms, why encourage game play? The only winners in this are the gaming companies."

However, the WHO's Director-General, Tedros Adhanom Ghebreyesus, praised the organization's cooperation with the industry as another useful tool in fighting the virus.

"Thank you @RaymondChambers for mobilizing the gaming industry to feature @WHO advice on #COVID19 to their users," he tweeted. "We all must #PlayApartTogether to beat the #coronavirus."

The maker of the hugely popular mobile game Pokemon Go has also said it would make changes and create new events to support indoor activities between players around the world.

And, many of the world's top professional gamers came together to record a public service announcement to raise awareness among players on ways to prevent the spread of the virus.

Bryan Lynn wrote this story for VOA Learning English, based on online reports. Ashley Thompson was the editor.

quarantine – n. to be kept separate from others to prevent the spread of disease of sicknes

exclusive – adj. not shared with everyone

lens – n. a curved piece of glass used in cameras, glasses and scientific equipment for looking at things

curve – n. a line that bends around like part of a circle

addiction – n. the problem of not being able to stop doing or taking something because you are dependent on it

ironic – adj. saying something you do not mean, as a joke

virtual – adj. used, carried out or stored by means of a computer

encourage – v. urge something to do something

mobilize – v. to organize a group of people so that they support of oppose something or someone