Will New UN Measures Get North Korea to Change?

Update Required To play the media you will need to either update your browser to a recent version or update your Flash plugin.
By Mario Ritter
12 September, 2017


Nations are expressing support for new United Nations restrictions placed on North Korea in reaction to its sixth nuclear test.

"The only way for it (North Korea) to get out of diplomatic isolation and economic pressure is the come back to the dialogue table," said Park Soo-hyun, a presidential spokesman. 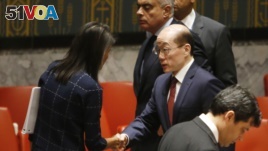 U.S. Ambassador to the United Nations Nikki Haley speaks to China's U.N. Ambassador Liu Jieyi after a vote to adopt a new sanctions resolution against North Korea during a meeting of the U.N. Security Council, Sept. 11, 2017.

U.N. Security Council resolution 2375 aims to punish North Korea for its September 3 nuclear test. The test was recorded as a 6.3-magnitude earthquake. North Korea says the test was of a hydrogen bomb, a weapon far more powerful than those tested earlier.

The resolution calls for cutting North Korea's oil imports by one-third. Haley called oil the "life blood" of the nation's effort to develop a nuclear weapon.

North Korean imports of other fuels, including gas, are to drop by more than one half.

The resolution seeks to bar new work permits for North Korean workers employed in other countries. North Korea has long been accused of using money paid to its overseas workers to support its weapons programs.

In addition, the Security Council called for freezing the assets of three powerful groups linked to the government.

The United States had sought stronger measures against North Korea. At first, the U.S. called for a complete oil embargo and a freeze on the assets of leader Kim Jong Un. It also sought to permit military force, if necessary, to stop ships supplying banned goods.

Both countries say that discussions are the only way to solve the North Korean issue.

China and Russia also have urged the United States to suspend its joint military training with South Korea in exchange for a North Korean nuclear freeze.

However, supporters of the Trump administration's policy of "maximum pressure" on North Korea say the most recent sanctions are not enough.

Grant Newsham is a researcher with the Japan Forum for Strategic Studies in Tokyo. He says if these U.N. restrictions do not work, the U.S. could punish Chinese banks that do business with North Korea.

On Tuesday, reports say some of China's major state-owned banks have stopped providing financial services to North Koreans. That could be a sign of increased enforcement of existing sanctions.

But critics of North Korea sanctions say that approach will not cause the country to disarm.

sanction –n. measure put in place to cause a country to obey international law, usually by limiting or banning trade

dialogue –n. talks and discussion between two or more parties

asset –n. something of value

maximum –adj. the most

trigger –n. something that causes an action or process to begin